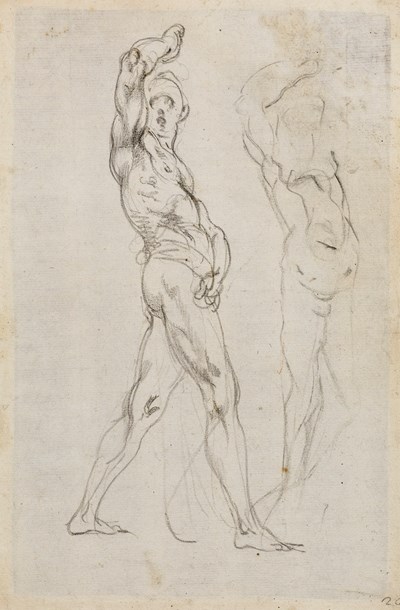 
This drawing was first presented with an attribution to Pontormo by Janet Cox-Rearick in a supplement to her catalogue raisonné of the artist’s drawings in a 1994 symposium paper, published in 1996. The attribution to Pontormo was subsequently confirmed by Dr. Cox-Rearick on first-hand inspection of the drawing in 1998. This drawing - which depicts a male nude studied from the side with, at the right, a subsidiary sketch, more rapidly drawn, of the same figure seen frontally - may on stylistic grounds be dated to the first years of the 1520’s.Janet Cox-Rearick has compared the present sheet stylistically with three black chalk drawings by Pontormo of the early 1520’s, all of which are in the Uffizi. The first of these is a sheet of studies of male nudes - one related to the lunette fresco of Vertumnus and Pomona painted by Pontormo at Poggio a Caiano - in which one of the nudes is posed in a very similar manner to the main figure in the present sheet, with his right arm raised over his head. Closely related to the present sheet, the elongated male nudes of the Uffizi drawing appear to have been intended for the Poggio a Caiano fresco but, as Cox-Rearick has pointed out, ‘both the expressive intensity and the assertive plasticity of these youths proved unsuitable to Pontormo’s final conception of the lunette’, and they were replaced by smaller and less dramatically posed putti in the final composition. Another black chalk drawing in the Uffizi, a study of a horse and rider that is one of several drawings related to a lost or unexecuted composition of The Israelites in the Desert, is also stylistically very close to the drawing here exhibited, as is a sheet of studies for a Lamentation composition, also in the Uffizi, which can be related to the decoration of the Certosa at Galluzzo, painted by Pontormo between 1523 and 1525. It is interesting to note that, as Janet Cox-Rearick was the first to point out, the figure in this drawing by Pontormo may have been the inspiration for the similarly posed male nude holding a camel by a bridle in Rosso Fiorentino’s contemporaneous painting of Rebecca and Eliezer at the Well. Painted in Florence around 1523-1524, before the artist’s move to Rome in the spring of 1524, Rosso’s Rebecca and Eliezer is now lost but its composition is known through a painted copy in the Museo Nazionale di San Matteo in Pisa. Cox-Rearick has suggested that Rosso may have derived the pose of the male nude leading a camel from Pontormo’s drawing, which is much more spontaneous in appearance and is likely to be the artist’s own invention. Referring to the present sheet, she has noted that, ‘I have quoted a few instances, referring to Bandinelli, Bronzino and Salviati, in which these artists made reciprocal use of one another's drawings. It is therefore not far-fetched to suggest that Rosso may have used this nude study by his friend Pontormo as a model for the camel driver in Rebecca and Eliezer at the Well.’ The striding male nude in Rosso’s painting, probably adapted from the present sheet by Pontormo, was to be influential on later Florentine artists, as can be seen in a drawn copy of the same figure by Francesco Salviati, today in the collection of the Albertina in Vienna.A new and fascinating addition to the corpus of drawings by Pontormo, the present sheet adds to our knowledge of the artist’s activity in the early 1520’s, and provides a further example of the boundless energy and creativity of this remarkable 16th century draughtsman. As Janet Cox-Rearick has perceptively written, ‘Pontormo’s drawings have an independent stylistic identity and development, a specifically graphic language of their own that extends significantly, and in often unpredictable directions, our understanding of his total artistic achievement.’

Two Studies of a Standing Male Nude, One Arm Raised