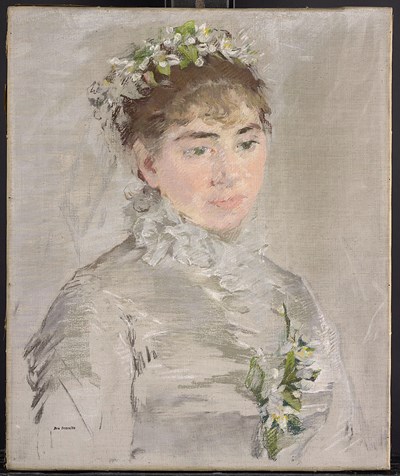 
Previously known only from old photographs and only recently rediscovered, the present pastel is a portrait of Jeanne Gonzalès, the artist’s younger sister and favourite model, and an artist in her own right. This portrait may be dated to 1879, shortly after Eva Gonzalès’s marriage to Henri Guérard. The artist often portrayed her sister in various guises, and she has here chosen to depict her dressed in Eva’s own satin wedding dress. (Jeanne was, in fact, to marry Eva’s widowed husband a few years after her sister’s death. As Belinda Thomson has noted of the present pastel, ‘Jeanne went so far as to don the artist’s bridal dress when she posed for a pastel head, La mariée...a strangely prophetic act given that nine years on, she in turn would marry the same Henri Guérard following Eva’s premature death in childbirth.’) Eva Gonzalès painted a second pastel portrait of Jeanne wearing the same wedding dress, posed in profile to the right, which is today in a private collection. These two pastel portraits, both entitled La Mariée (The Bride), were exhibited together several times in later years. Octave Mirbeau appears to have been one of the first to mention this particular work in print. Writing on the occasion of the posthumous retrospective exhibition of Gonzalès’s work, held at the Salons de La Vie Moderne in January 1885, he noted in particular the two La Mariée pastels: ‘I love the two studies of brides, which have a freshness and a tender spirit, delicious to see. I find there, in the softness of the shades, in the play of the light on the white fabric and the transparent cloud of veils, a particular caress.’ Jeanne Gonzalès seems to have posed for her sister almost daily, and more than twenty works by Eva – around a third of her surviving oeuvre - may be identified either as portraits of Jeanne8, or have her as their model. As one modern scholar has noted, ‘Eva chronicled her sister’s life, creating an intimate biography in paint and pastel.’ The artist’s preoccupation with using her sister as a model is all the more telling as she herself seems never to have produced a formal painted or drawn self-portrait. As the 19th century art historian and critic Claude Roger-Marx perceptively noted of the present pastel, ‘This is her dress of white satin, her bridal coiffure, which she will, on two occasions, make Jeanne wear. It is as if she has observed and imagined herself through this duplicate of herself that she loved, bullied, transformed as she pleased, so as to create twenty different sisters...'Both La Mariée pastels were again singled out for praise in several reviews of the exhibition of Eva Gonzalès’s work held at the Galerie Bernheim-Jeune in Paris in 1914. Writing in La Chronique des Arts, the critic Louis Hautecoeur noted of the artist that, ‘She achieves a true mastery of pastel: her Bridesmaids or her Brides prove it: she works with hatched strokes that confine light and shade within the continuity of their lines; she likes the subtle shades, the nuances of pale, but colourful, grays, these scenes of quiet intimacy, and some of these pastels are excellent works.’ Another review of the exhibition, in the magazine Art et Décoration, noted in particular the ‘small pastel portraits of women (Woman with a Red Hat, The Bride, The Bridesmaid, The Bunch of Violets)...all charming in their candour, with a very personal focus and, without seeming to be, of astonishing virtuosity in the brevity and the uniform economy of their execution.’Executed in 1879, this splendid pastel portrait remained in Gonzalès’s studio until her death, and was included in the posthumous exhibition of her work in 1885. The painting passed to her sister Jeanne Gonzalès, the model for the present work, and is listed (as ‘La mariée, pastel par Eva Gonzalès’) in an inventory compiled by Henri Guérard on 25 May 1897. The pastel was later recorded in the possession of the artist’s son, Jean-Raymond Guérard, in 1924, and was included in an exhibition of Gonzalès’s work in a Parisian gallery in 1932. After that, however, this pastel portrait was lost until its recent discovery in an American private collection. Its reappearance confirms its status as one of the finest examples of the relatively small corpus of pastels produced during the brief career of Eva Gonzalès, as well as among the most intimate and personal of all her works.

Provenance:
Among the contents of the artists studio at the time of her death in 1883The artist’s sister, Jeanne Gonzalès (later Jeanne Guérard-Gonzalès), Paris, and listed in the inventory compiled by Henri Guérard on 25 May 1897By descent to the artist’s son Jean-Raymond Guérard, Paris, by 1924Edgardo Acosta Gallery, Beverly Hills, Los AngelesPrivate collection, Seattle, Washington, until 2011.