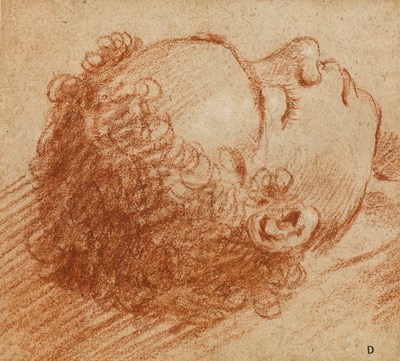 The Head of a Sleeping Boy Sold


On the basis of a close inspection of the drawing, Babette Bohn has attributed the present sheet to Ludovico Carracci. She points out that that stylistic comparisons may be made with a handful of chalk drawings of the late 1580’s by Ludovico, including a study of a nude boy asleep in the British Museum, a sheet of studies of heads in the J. Paul Getty Museum in Los Angeles and a red chalk study of the head of a sleeping boy in a private collection. Each of these drawings has previously borne attributions to Annibale Carracci and, like the present sheet, underlines the difficulty of separating the early chalk drawings of Annibale and Ludovico Carracci.The present sheet was once part of an album of drawings compiled by the 18th century French collector François Desmarais (or Des Marais), the contents of which were dispersed at auction in 1984. The title page of the album bore the inscription ‘Dessins origin:x / des plus fameux / Peintres, Rassemblez / Par M. Des Marais: / 1729:’.

The Head of a Sleeping Boy