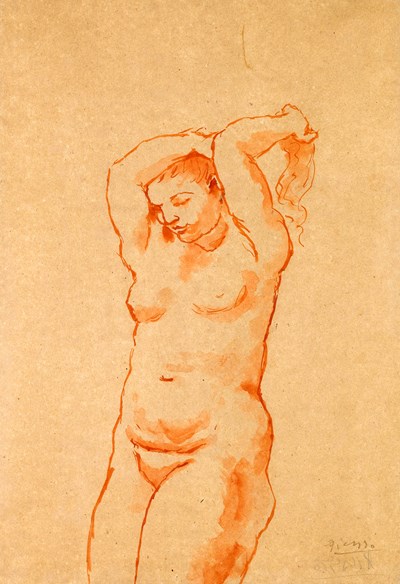 
In the spring and summer of 1906, the young Pablo Picasso and his mistress Fernande Olivier spent several weeks in the remote mountain village of Gósol, in the mountains of the Spanish Pyrenees. During his stay in this small village of some nine hundred inhabitants, Picasso produced a substantial and varied body of work, including a number of very large canvases. Aged just twenty-four, he was more prolific during this period in the Pyrenees than at any previous time in his budding career.Dating from the final phase of the Rose Period of Picasso’s career, the present sheet is likely to have been drawn during the artist’s stay in Gósol in the summer of 1906, although it has also been dated by some scholars to the previous year. Of the works of this period, Gary Tinterow has written that, ‘In the remote Catalan village of Gosol, in the Pyrenees, Picasso achieved an almost schematic rendering of form by stripping his images of both narrative content and ornament. As always he concentrated on the human figure, but in Gosol the majority of paintings and drawings were of nudes – adolescent boys, young children, and his lover Fernande – unselfconscious in their nudity and closely related to their elemental settings.’ The actual pose of the woman in the present sheet is, however, already found in an earlier drawing of 1904; a pen and watercolour study of a seated nude man and a standing nude woman in the Peter Ludwig collection in Aachen, which dates from the time of the artist’s transition from the Blue to the Rose period.The theme of a woman combing or arranging her hair was one that Picasso began to consider in 1905, and which he developed in several paintings and drawings over the next year. His lover Fernande Olivier had long auburn hair and Picasso became engrossed in watching her daily ritual of arranging her coiffure; an allure that soon found its way into his art. As Josep Palau i Fabre has written, ‘Then there is another theme, which had been in Picasso’s mind for over a year, and which he had already been developing in Paris before going to Gósol: that of women’s hair, dressed or being dressed. The sensual quality of a woman’s hair, falling loosely or held up by a hand, continued to fascinate him.’ The raised arms of the model in this drawing is another motif common to several works of this date. As another scholar has observed, ‘The hand raised to the hair is a convention that Picasso explored repeatedly in 1906...It is a gesture common to the toilette or coiffure motif and to classical subjects like the Venus Anadyomene, where an idealized nude wrings her hair as she emerges from the sea.’ Fernande’s voluptuous figure, facial features and red hair may be perceived in this striking drawing, which employs the reddish tonality that is such a characteristic feature of Picasso’s works of the late Rose period.Picasso’s use of a reddish ink and delicate red washes, applied with the brush, in this drawing is found in several other figure studies of this period. The simple brown paper used for the present sheet is perhaps an indication of the artist’s limited supplies of paper during his stay in Gósol. In July of 1906, Picasso wrote to his friend, the Catalan sculptor Enric Casanovas, ‘I want you to buy or send me by mail a roll of twenty sheets of papier Ingres and as quickly as you can because I have finished the small stock of paper I bought in Barcelona...’A fine example of Picasso’s confident draughtsmanship at the height of his Rose Period, this drawing evinces the artist’s new interest in a more sculptural conception of the female form - inspired by the curvaceous body of his lover and model Fernande Olivier - after the more lean, angular figures of his earlier Blue Period; this would be a trend that would be developed more fully in the coming months. In the words of one recent scholar, writing of this period, ‘The many drawings and paintings that [Picasso] did of Fernande reveal that having her so close and focusing on her as a model helped him develop his approach to the representation of the body. In Gósol the pink and reddish tones of the palette he used to paint Fernande, principally nude, began to infiltrate every aspect of the space and objects surrounding the figure.’ And, as Fernande Olivier herself wrote of Picasso during the couple’s brief stay in Gósol in the summer of 1906, ‘The atmosphere of his own country seems to inspire him, and there is much stronger emotion and sensitivity in these drawings than anything he has done in Paris.’The first known owner of the present sheet was the eminent Swiss collector Rudolf Staechelin (1881-1946), in whose possession it is recorded by 1920. One of the pioneering collectors of modern art in Europe, Staechelin purchased the bulk of his Impressionist and Modern works between 1917 and 1918 and also in the 1920s. This drawing was one of two paintings and four drawings by Picasso lent by Staechelin to the Ausstellung französischer Malerei, an exhibition of French painting held at the Kunsthalle in Bern in November 1920.