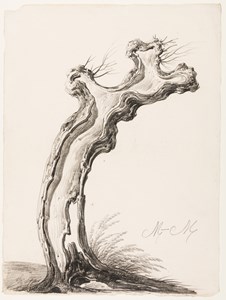 The life and career of the landscape artist Alphonse Mandevare remains largely undocumented. While the year of his birth is unknown, he seems to have spent most of his career in Paris. He first exhibited at the Salon in 1793, where he showed two gouache landscapes, both now in the Musée des Beaux-Arts in Nantes. Although sometimes recorded as having died in 1829, he appears to have continued to exhibit regularly at the Salons until around 1848. His Salon entries were almost always landscape drawings in black chalk or gouache; indeed, his contemporary reputation seems to have rested primarily on his work as a draughtsman. In 1804 Mandevare published a treatise entitled 'Principes raisonnes du paysage a l’usage des Ecoles des Departements de l’Empire francais, dessins d’apres nature'. Intended as a guide to landscape painting for the amateur artist, the book consisted of twelve cahiers, in both folio and quarto formats, each made up of four plates engraved by Galine after Mandevare’s drawings and accompanied by an explanatory text. The purpose of the treatise was to establish a progressive series of exercises by which young artists could develop the tools necessary to create picturesque landscapes. These began with individual studies d’apres nature of prominent elements within a landscape – leaves, branches, trees, rock formations and so forth - which could then be integrated into a panoramic view. A selection of drawings by the artist, apparently related to the Principes raisonnes du paysage, appeared in the 1808 sale of the printmaker Laurent Guyot in Paris. A number of Mandevare’s studies of trees were engraved by the Lambert brothers, and he himself produced two landscape lithographs in 1822. Mandevare has only recently been rediscovered as a draughtsman, with the appearance of several groups of chalk drawings originating from the collection of the artist’s descendants. Many of these large sheets bear dates between 1820 and 1825, and several are now in private collections. A group of ten large black chalk drawings by Mandevare have been acquired by the British Museum, while other landscape drawings have lately entered the collections of the National Gallery of Scotland in Edinburgh, the Pierpont Morgan Library in New York, the Ashmolean Museum in Oxford, the Fondation Custodia in Paris and the National Gallery of Art in Washington, D.C.. A sketchbook with thirteen pencil studies of gnarled trees by Mandevare is in the Frances Lehman Loeb Art Center at Vassar College in Poughkeepsie, New York, while further drawings by the artist are in the museums at Grenoble, Lille, Schwerin and Soissons.