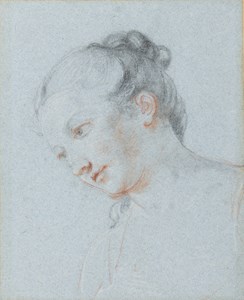 Charles-Joseph Natoire studied with his father before entering the Parisian studio of Louis Galloche at the age of sixteen, transferring after three years to the atelier of François Le Moyne. Winning the Prix de Rome in 1721, he arrived in Rome two years later, and lived as a pensionnaire at the Académie de France until 1728, also winning a first prize in a competition at the Accademia di San Luca. After a period of time spent travelling around northern Italy, Natoire returned to France in 1730, when he was admitted into the Académie Royale as an associate member, rising to full membership in 1734. During the 1730s and 1740s he was much in demand as a painter, earning a number of significant Royal, public and private commissions. Among his most important works were a series of paintings for the château of La Chapelle-Godefroy in Champagne, executed between 1731 and 1738. He also joined François Boucher and Carle van Loo in the decoration of the Hôtel de Soubise, on which he worked at the end of the 1730s. Natoire received royal commissions for work at Fontainebleau, Versailles and Marly, as well as for designs for Beauvais and Gobelins tapestries. Appointed director of the Académie de France in Rome in 1751, he was to remain in Italy for the rest of his life. Between 1754 and 1756 he designed a fresco of The Apotheosis of Saint Louis for the vault of the nave of the French national church in Rome, San Luigi dei Francesi. Natoire painted relatively little during the 1760s, however, and much of his later Roman years were spent drawing. He encouraged the pensionnaires at the Académie to draw directly from nature, and himself produced a number of finished landscape drawings which were to have a particular influence on two of his young students, Jean-Honoré Fragonard and Hubert Robert.