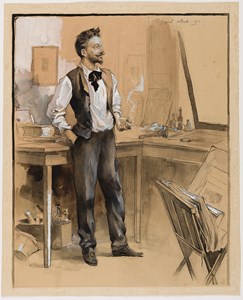 Paul Steck studied at the Ecole des Beaux-Arts in Paris under the Orientalist painter Jean-Léon Gérôme. A painter of landscapes, portraits and scenes from literature and allegory, often with a Symbolist bent, Steck began exhibiting at the Salons in 1890, earning an honourable mention in 1895. The following year he won a third-class medal at the Salon and also became member of the Société des Artistes Français. Among his best-known works is a remarkable painting of Ophelia Drowning of 1895, today in the Musée du Petit Palais in Paris. Steck took part in the fifth Salon de la Rose + Croix, organized by the eccentric Symbolist novelist and critic Joséphin (‘Sâr’) Péladan, in 1896, and four years later won a bronze medal at the Exposition Universelle of 1900.