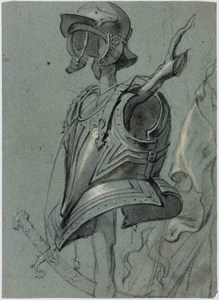 The son of a Flemish sculptor of the same name, Erasmus Quellinus the Younger probably trained initially with his father before entering the studio of Peter Paul Rubens. His earliest known work is a painting of The Adoration of the Shepherds of 1632, the same year that he joined the painter’s guild in Antwerp, where he was to work for almost the entirety of his career. Throughout the second half of the 1630s Quellinus was active as one of Rubens’ closest collaborators. He worked with the master in the last years of his life; on the decorations for the entry of the new governor Cardinal-Infante Ferdinand into Antwerp in 1635 and, for Philip IV of Spain, on a series of paintings for the hunting lodge of the Torre de la Parada near Madrid, executed between 1636 and 1638. Quellinus also provided title pages and book illustrations for the Plantin-Moretus print workshop and publishers in Antwerp, working under Rubens’ supervision but in his own style. Following the death of Rubens in 1640, Quellinus continued to work as a draughtsman and designer for the Plantin-Moretus firm, and was also appointed the official painter of the city of Antwerp, with responsibility for all civic decorative schemes over the next quarter of a century. Quellinus enjoyed a reputation as one of the leading ecclesiastical and history painters in Flanders, and also produced a number of portraits. Among his largest works are two paintings commissioned by Jesuits, an Immaculate Conception for the church of Saint-Michael in Louvain and an altarpiece of Saint Gregory of Nazianzus now in the cathedral of Lima in Peru. In 1656 Quellinus and his younger brother Artus, a sculptor, were invited to Amsterdam to contribute to the decoration of the new City Hall. Apart from Rubens, Quellinus painted easel pictures in collaboration with such artists as Pieter Boel, Daniel Seghers, Jan Philip van Thielen, Jan Fyt, Joris van Son and Jan Pieter Brueghel, while among his pupils were his son Jan-Erasmus Quellinus and Wallerant Vaillant. Quellinus died in Antwerp in November 1678, at the age of seventy-one. Extant drawings by Erasmus Quellinus the Younger – several of which are signed although none are dated - include studies for paintings and altarpieces, as well as designs for frontispieces, book illustrations and engravings. Signed drawings by the artist can be found in several museum collections, including the Koninklijk Museum voor Schone Kunsten and the Museum Plantin-Moretus in Antwerp, the Kupferstichkabinett in Berlin, the Musées Royaux des Beaux-Arts in Brussels, the British Museum in London, the State Hermitage Museum in St. Petersburg, the Nationalmuseum in Stockholm and the Royal Library at Windsor Castle.