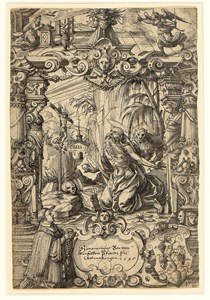 The precocious Daniel Lindtmayer’s first teacher was his father Felix, who was likewise a glass painter, and he also came under the profound influence of the drawings and woodcuts of Tobias Stimmer. The younger Lindtmayer rose to become one of the leading masters in the field of glass painting, working first in Schaffhausen and then in Basel, where he was established by 1574 and employed as a designer for the city’s glass painters. As has been noted of Lindtmayer, ‘Daniel’s work was far more complicated and ‘literary’ than his father’s. His designs for Kabinettscheiben are deeply influenced by developments in the representation of linear perspective in contemporary prints. The images are far more elaborate and incorporate Renaissance strapwork, Classical elements in the architectural frames and volumetric rendering of the human figure.’ Lindtmayer’s later travels found him working in Feldkirch, Königsfelden, Lausanne, Schwyz, Wolfenschiessen and elsewhere, although he was, for the most part, based in his native Schaffhausen. In 1595 he was accused of the attempted murder of a goldsmith named Stülz in Konstanz, but escaped punishment on the grounds of insanity. He left Schaffhausen the following year and eventually settled in Luzern, converting to Catholicism. Lindtmayer’s last known dated work was executed in 1603, and he died three or four years later, leaving behind a large corpus of drawings as well as a number of prints and at least one painting.