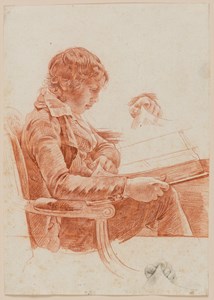 Born in Alsace, Martin Drolling was a specialist in portraiture and genre painting, and as a youth studied the example of Dutch 17th century painters. (As one scholar has noted of the artist, ‘His neat and careful style is directly inherited from the Dutch genre scenes, as are his portraits.’) Drolling exhibited at the Salons from 1793 onwards, and several of his interiors and genre pictures were reproduced as prints. He was occasionally employed by the portrait painter Elisabeth-Louise Vigée-Lebrun to paint objects in her portraits, and through her met Jean-Baptiste Greuze. Drolling’s genre scenes are often likened to those of his contemporary Louis-Léopold Boilly, and indeed the two artists ‘are the best examples of that intimate, bourgeois art which appeared quite early in total contrast to the historical and neo-classical school of David and his pupils.’ Between 1802 and 1813 he worked as a designer and decorator at the Sèvres porcelain factory, yet he remained impoverished for much of his life.