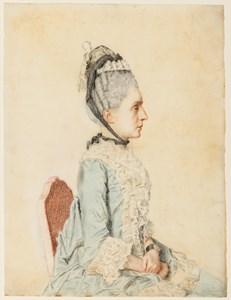 Born in the-then independent republic of Geneva and trained in the art of miniature painting on enamel, Jean-Étienne Liotard completed his artistic education in Paris, arriving there in 1723 and working as an independent artist by 1726. He soon rose to prominence as a portrait painter, and in fact became known almost exclusively for his masterful portraits in pastel. His successful career took him throughout Europe, and he worked in France, Italy, Greece, Turkey, Romania, Austria, Germany, Holland and England. It was in particular his voyage to the Near East, made in 1739 in the company of his English patrons John Montagu, Earl of Sandwich and William Ponsonby, later 2nd Earl of Bessborough, which was to have a lasting influence on Liotard. The artist lived and worked in Constantinople for four years, receiving commissions mainly from Westerners living in the city, many of whom were portrayed in Turkish dress. In 1742 Liotard spent ten months in Moldavia before establishing himself in Vienna at the court of the Empress Maria Theresa. (His two-year stay in Vienna was the only time in his long career when the artist employed assistants to help him with commissions.) Liotard had returned to Europe with a large number of portrait and genre drawings of Western and Turkish subjects, as well as clothing and accessories. Indeed, the artist grew a long beard and dressed in Turkish clothing, styling himself ‘le peintre Turc’, for several years afterward. After a peripatetic career working in several European cities – Venice, Naples, Frankfurt, Lyon, Paris (where he spent eight years and is said to have earned around 30,000 livres annually), London, Amsterdam and The Hague - and obtaining numerous significant portrait commissions, Liotard settled in Geneva in 1757. The second half of his career, amounting to some thirty years, was spent in his native city. A wealthy and successful artist, he received numerous portrait commissions from prominent citizens of Geneva and visitors to the city. He also produced portraits of friends, family members and colleagues, as well as a number of still life compositions and self-portraits. (He also occasionally worked as a picture dealer.) Unlike many of his contemporaries, Liotard had no pupils and seems also not to have had a workshop or assistants. In 1781 he published a treatise on painting, and in addition dictated an autobiographical memoir to his eldest son, Jean-Etienne Liotard the Younger. The artist died in Geneva in 1789, at the age of 87. During a life and career that lasted for almost the entire length of the 18th century, Liotard produced a total of over five hundred works; mainly pastels, which number around three hundred, but also some thirty paintings and around 150 chalk drawings, as well as miniatures, enamels and a handful of prints. The finest collection of Liotard’s work is today held by the Musée d’Art et d’Histoire in Geneva, while smaller but nevertheless choice groups of works are in the Rijksmuseum in Amsterdam and the Louvre in Paris.