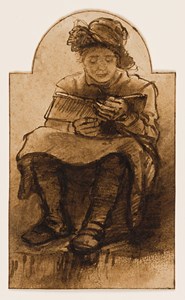 Not much is known of the life and career of the Amsterdam artist Abraham Van Dijck (or Dyck), who remains one of the more obscure artists in the circle of Rembrandt. Relatively few signed or dated paintings and drawings by the artist have survived, and as such a chronology of his career is difficult to establish. The son of a prosperous wine merchant in Dordrecht, he may have studied there initially with Samuel van Hoogstraten, and is thought to have been a pupil in Rembrandt’s Amsterdam studio in the early 1650s. (Van Hoogstraten sent several of his pupils to complete their training with his former master Rembrandt in Amsterdam.) While Van Dijck’s putative period of apprenticeship in Rembrandt’s studio remains undocumented, it is certainly true that his earliest dated painting, a Presentation in the Temple of c.1651, reveals his knowledge of Rembrandt’s style. His work also displays the influence of a number of Rembrandt’s students and followers, in particular Nicolaes Maes, as well as the genre painters Gabriel Metsu, Caspar Netscher and Quentin van Brekelenkam. Following his time in Amsterdam, Van Dijck returned to his native Dordrecht, where he painted numerous depictions of old women and men - in contemplation, prayer, reading or asleep – that are indebted to the example of Nicolaes Maes. The fact that Maes’s paintings were a particular influence on Van Dijck suggests that the two artists were close, and indeed this may also be said of their families. Van Dijck’s parents lived on the same street as Maes in Dordrecht, and his younger brother Hugo owned a pair of portraits of himself and his late wife; the former by his brother Abraham and the latter by Maes. Around 1660 Van Dijck seems to have moved to Amsterdam. Only three dated works are known from the 1660s, however, and none after 1667. The 18th century biographer Arnold Houbraken claims that Van Dijck worked in England, like his more famous Flemish namesake Anthony Van Dyck, but this remains unproven. The artist, described as ‘Abram van Dijck, bachelor painter’, was buried on 27 August 1680 in the Grote Kerk in Dordrecht. Only about forty paintings by Abraham Van Dijck are known today, including just a handful of signed works; in the Royal Collection at Buckingham Palace, the Mauritshuis in The Hague (on long-term loan to the Rembrandt House Museum in Amsterdam), the Isabel and Alfred Bader collection in Milwaukee (promised to the Agnes Etherington Art Centre at Queens University in Kingston, Ontario) the Fürstlich Hohenzollernsche Sammlung at Schloss Sigmaringen and the Hermitage in St. Petersburg, as well as a number of private collections.