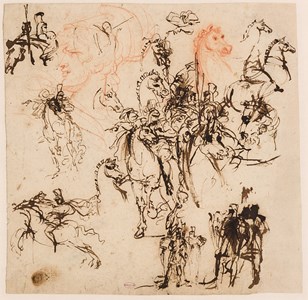 The son of a portrait and miniature painter, Antoine-Jean Gros entered the studio of Jacques-Louis David at the age of fourteen, studying alongside Anne-Louis Girodet and François Gerard. He enrolled in the Académie Royale de Peinture et de Sculpture in 1787 and won second place in the Prix de Rome competition in 1792. The following year, a few days after the death of Louis XVI on the guillotine, Gros decided to leave Paris for Italy. He was to spend the next eight years in Italy, working mainly as a portraitist in Florence, Genoa and Milan, and this period was to have a profound influence on his mature style. It was while he was in Genoa that he was introduced to Joséphine Bonaparte and accompanied her to Milan to be presented to Napoleon, resulting in a majestic portrait of Napoleon at Arcole, exhibited at the Salon of 1801. The huge popularity of the engraving made after the painting served to establish the artist’s reputation in Italy and France. Through the influence of Napoleon, Gros was appointed a member of the committee entrusted with selecting important works of art in Italy to be sent to France. Although he made his debut at the Paris Salon in 1798, Gros did not return to France until October 1800. Soon afterwards, he was commissioned to paint three portraits of Napoleon as First Consul, and he continued to be one of the foremost painters of the Napoleonic era. Among his major works of this period was Napoleon Visiting the Plague-Stricken at Jaffa, exhibited to much acclaim at the Salon of 1804, and Napoleon on the Battlefield at Eylau, completed in 1808. In 1811 Gros received a commission to decorate the cupola of the church of Sainte Geneviève (the Panthéon) in Paris, completed only in 1824. After the fall of Napoleon in 1815 and David’s subsequent exile to Brussels, Gros took over his master’s Parisian studio and pupils at the Ecole des Beaux-Arts, although he also admired and influenced the work of such younger artists as Eugène Delacroix and Théodore Géricault. As one modern scholar has noted, ‘At heart Gros was a romantic, and for modern painting and French painting in particular, the forerunner of that expressive mode, an inspiration to Géricault and Delacroix, as well as to a large group of other artists, even if none was his pupil. Géricault and Delacroix were the actual foundation of romantic expression in nineteenth-century French painting; but Gros played a considerable part in its advent and himself uninfluenced produced it from the inherent impulsion of his own feeling.’ Gros gained important commissions during the reigns of Louis XVIII and Charles X and in 1824, at the height of his public success, was ennobled as a Baron by Charles X. But at around the same time his work began to fall out of fashion, and he soon found himself at odds with the generation of younger artists centred around the dominant figure of Jean-Auguste Dominique Ingres. Long prone to fits of depression, and distraught over the poor reception at the Salon of his latest painting, a Hercules and Diomedes, he committed suicide in June 1835, throwing himself into the river Seine at Meudon. Several months later the contents of his studio were dispersed at auction. Held at his studio in Paris, the sale included 122 lots of framed and unframed drawings, including one lot of twenty-four sketchbooks and another lot containing some fifty sketches and studies for compositions by the artist. Many of these drawings, including the sketchbook pages, have since been widely dispersed. The most significant extant collection of drawings by Gros, numbering four sketchbooks from his seminal Italian period and seventeen individual drawings, is today in the Louvre.