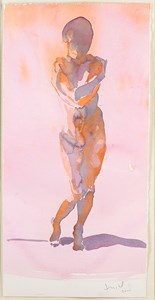 Born in New York City and raised in Sag Harbour, an affluent town on Long Island, Eric Fischl is one of the finest American painters to emerge from the Neo-Expressionist movement in the 1980s. He studied at Arizona State University and the California Institute of the Arts, where he received his Bachelor of Fine Arts degree in 1972. Two years later he accepted a position as a professor at the Nova Scotia College of Art and Design in Halifax; a post he held from 1974 until he relocated to New York City in 1978. Fischl’s first solo exhibition was held while teaching in Nova Scotia in 1975, and a show at the Edward Thorpe Gallery in New York in 1980 launched his career there. The following year, his controversial presentation of the sizeable painting Bad Boy led to a degree of international renown. Fischl has since had numerous solo exhibitions in galleries and museums across the globe, notably at the Institute of Contemporary Arts in London in 1985 and the Whitney Museum of American Art the following year, as well as later exhibitions at the Baltimore Museum of Art, the Museum of Contemporary Art in Chicago, the Louisiana Museum of Modern Art in Humlebaek, the Musée Cantonal des Beaux-Arts in Lausanne, the Walker Art Center in Minneapolis, the Yale University Art Museum in New Haven, the Saint Louis Museum of Art, the Art Gallery of Ontario in Toronto and elsewhere. Fischl’s work is represented in numerous American, Canadian and European museums. In the catalogue of an exhibition at the Waddington Gallery in London in 1989, the artist’s impact on the art world was noted: ‘When Fischl first entered prominence and notoriety as an artist – the initial shock of his subject matter, its patently sexual material, apart – the most astonishing feature was his willingness to conceive of the power of painting to tell stories, to be a form of fiction.’ Although Fischl is best known for his provocative and large-scale paintings, he is a prolific and talented artist across several media, including photography and printmaking as well as sculpture, and has also worked on projects from artist’s books to stage designs. Characteristic of all of his work, in whatever medium, is an abiding interest in the human figure. However, as the artist has stated, ‘I make a distinction between “pose” and “posture”. I am not interested in poses. That is an abstraction. It is a concern of formalists. I am interested in posture. Posture is the shape the body takes with the accumulation of experience. Posture reveals in very explicit and precise terms the relationship an individual has with their soul. Posture is the externalization of the internal conflict we all experience.’