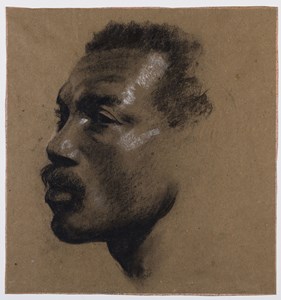 Born in Clapham, Glyn Warren Philpot studied at the Lambeth School of Art in London and, later, at the Académie Julian in Paris. Among his earliest paintings were portraits of his family and friends, since he could not afford professional models, and in 1904 he first showed a picture at the Royal Academy. He also began organizing small exhibitions, at borrowed studios and galleries, in order to bring his work to a wider audience. In 1906 he exhibited at the Society of Portrait Painters, and also began working from the first of a series of studios in Chelsea. Four years later he had his first significant one-man exhibition in a London art gallery, which was a modest critical and commercial success. Aptly described, by one friend who met the artist at around this time, as ‘a young man of brilliant powers who nevertheless was a traditionalist from the start and not a revolutionary’, Philpot counted among his early accomplishments a portrait of a Spanish bullfighter, painted in 1909, that received much critical praise, and a painting of The Marble Worker of 1911, which won the Gold Medal at the Carnegie International Exhibition in Pittsburgh two years later. A member of the International Society in 1912, he exhibited there for the next twelve years. Philpot developed a successful career as a society portrait painter, earning a considerable income from between ten and twelve commissions each year. He also produced a small number of sculptures in bronze. Elected an Associate of the Royal Academy in 1915, he became the youngest Royal Academician on his full election to the institution in 1923, and the same year was the subject of a large retrospective exhibition at the Grosvenor Galleries. Much admired for his refined draughtsmanship, confident technique and sense of colour, Philpot made regular trips to Italy to study the Old Masters, and sent paintings to the annual exhibitions at the Royal Academy. In 1927 he painted a mural for St. Stephen’s Hall in Westminster, and in 1930 was honoured with a solo exhibition at the Venice Biennale. In 1931 Philpot decided to move to Paris, which was to prove a turning point in his career. It was in the early 1930s that Philpot’s style changed dramatically, under the influence of Picasso and Matisse, and the art that he encountered in Paris. Bored by portraiture, he began to experiment with new techniques and subjects in paintings which he first showed at the summer exhibition of the Royal Academy in 1932. His newer work found much less acceptance with critics and collectors, however, and many were quite scathing in their assessment of it. (A headline in The Scotsman in 1932 declared ‘Glyn Philpot “Goes Picasso”’.) Philpot lost several of his former clients, who were unhappy with his new, more ‘modern’ style of painting, and his income suffered greatly, forcing him to sell his country house in West Sussex. During the 1930s exhibitions of his recent paintings and sculptures were held at the Leicester and Redfern Galleries in London, while he continued to travel abroad; to North Africa, Spain and France. He also began producing still life compositions and watercolours, which were easier to sell; the watercolours were exhibited at the Syrie Maugham Gallery in 1935. Philpot’s early death in December 1937, at the age of fifty-three, resulted in a memorial exhibition at the Tate Gallery the following summer. The subsequent turmoil of the Second World War, however, meant that his work was somewhat forgotten in later years. As one critic noted, writing on the occasion of an exhibition of the artist’s paintings at the Ashmolean Museum in Oxford in 1976, ‘Philpot’s unerring skill both in drawing and handling of paint, the wide-ranging originality of his subject pictures, and the careful yet sensitive characterisation of his portraits all compare favourably with the half dozen or so early twentieth-century British artists who have become household names. How is it, then, that with these qualities, one of the most sought-after society portrait painters of his time…can have slipped so quickly from the public mind?’