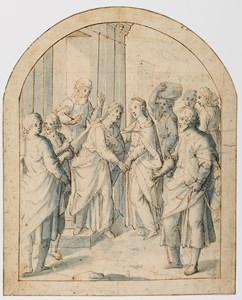 Giovanni Balducci, known as Il Cosci after the surname of an uncle who raised him, was trained in the studio of Giovanni Battista Naldini, eventually becoming his chief assistant and disciple. Between 1576 and 1579 he also worked under the supervision of Federico Zuccaro on the fresco decoration of the cupola of the Duomo in Florence and assisted Naldini on two frescoes for the church of San Marco in 1580. Balducci also worked under Alessandro Allori on the decoration of a corridor of the Uffizi. He was admitted to the Accademia del Disegno in Florence in 1582, a date which marked the start of his independent activity, and shortly thereafter contributed to the fresco cycle in the Chiostro Grande of Santa Maria Novella. A versatile and gifted painter, adept at both large-scale altarpieces and smaller devotional works for private patrons, as well as fresco painting, Balducci established a successful career, working mainly in Florence, Rome and Naples. In the late 1580s he received an important commission from Cardinal Alessandro de’ Medici for three altarpieces and nine frescoes of scenes from the life of Christ to decorate the Florentine church of the Gesù Pellegrino, a project which he completed by the end of the decade. In 1589 Balducci was among a group of artists - including Andrea Boscoli, Agostino Ciampelli, Ludovico Cigoli and Jacopo Ligozzi - working on the elaborate projects for temporary decorations in Florence to celebrate the wedding of Duke Ferdinando I to Christine of Lorraine. In the same year he painted a Crucifixion of Saint Andrew for the cloister of the Oratorio di San Pierino. The begining of the next decade found the artist working at the cathedral in Volterra, where he painted a Miracle of the Loaves and Fishes for the Serguidi chapel. In 1594, together with his fellow painter Agostino Ciampelli, Balducci was summoned to Rome by Alessandro de’ Medici to contribute to the decoration of his titular church of Santa Prassede. During the next two years in Rome he painted altarpieces for the churches of San Giovanni Decollato, San Giovanni dei Fiorentini, San Giovanni in Laterano and San Gregorio al Celio. He also painted an apse fresco for the cathedral in Velletri, commissioned from him by Cardinal Alfonso Gesualdo and completed in 1595. Soon afterwards, in the spring of 1596, Balducci travelled to Naples, in the retinue of Cardinal Gesualdo, to work on the decoration of the Duomo. He was to work in Naples and Calabria for more than thirty years, receiving numerous commissions for paintings and frescoes, notably a now-lost fresco cycle for the Palazzo Reale. Among the churches where he worked in Naples were San Giovanni dei Fiorentini, Santissima Annunziata, Santa Maria de Monteverginella and, towards the end of his life, Santa Maria del Carmine. Balducci also designed a number of tapestries, known as the Giornata di Seminara, for the Neapolitan nobleman Vincenzo Luigi di Capua. However, very little of his Neapolitan work survives today, and this period of his career remains relatively little known in comparison with his work in Florence and Rome. Balducci’s early drawings, sometimes on prepared or coloured paper, show the particular influence of his master Naldini. Although he had a fairly distinctive style as a draughtsman, and produced a fair number of autograph drawings, those of his later Neapolitan period are less well-studied. Relatively few drawings by the artist can be connected with finished paintings or frescoes, and therefore establishing a firm chronology of his style as a draughtsman remains a challenge. A small but interesting group of drawings by Balducci is today in the Musée des Beaux-Arts in Lille, while other examples are in the Hessisches Landesmuseum in Darmstadt, the National Gallery of Scotland in Edinburgh, the Uffizi and the Biblioteca Marucelliana in Florence, the Wadsworth Atheneum in Hartford, the British Museum and the Courtauld Institute Gallery in London, the Biblioteca Nacional and the Museo del Prado in Madrid, the Staatliche Graphische Sammlung in Munich, the Louvre in Paris, the Istituto Centrale per la Grafica in Rome, the Biblioteca Reale in Turin and elsewhere.