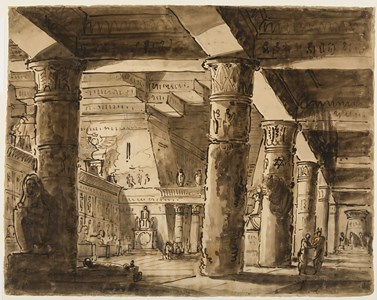 Much of what we know of the life and work of Antonio Giuseppe Basoli is derived from an autobiographical manuscript, written in 1821 and today in the Accademia di Belle Arti in Bologna. A painter, decorator and scenographer, Basoli is best known for his stage designs and drawings of architectural interiors; indeed, he described himself as a ‘pittore di decorazioni da teatro, da camera e quadri di tal genere’. He received his early training, between 1786 and 1794, at the Accademia Clementina in Bologna, where he was particularly influenced by the work of the Gandolfis and the Bibiena family. Basoli was active in and around Bologna for his entire career, during the early part of which he worked as a figure painter on a number of decorative projects in collaboration with the theatrical designer Pelagio Palagi. Basoli decorated the Teatro Comunale in 1809 and worked at various palaces in Bologna, including the Palazzo Rosselli del Turco, Palazzo Sanguinetti and Palazzo Hercolani, as well as several villas in the surrounding province. He served as a professor of ornamental design (‘direttore di disegni e ornamenti’) at the Accademia di Belle Arti from 1804 to 1826, and succeeded Antonio Sanquirico as the principal designer at the Teatro alla Scala in Milan. His numerous designs for the stage, including many intended for performances at La Scala, were engraved in two publications; the Raccolta di prospettive serie, rustiche e di paesaggio, published in 1810, and the Collezione di varie scene teatrali, which appeared in 1821. Basoli also produced a number of designs for furniture, lamps and other household objects.