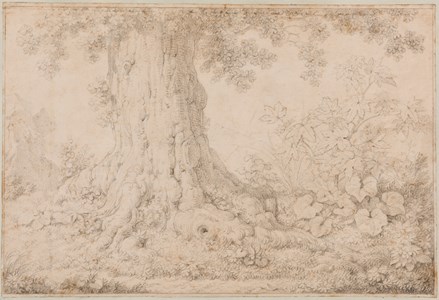 The German landscape draughtsman Christoph Heinrich Kniep began his career as a portrait painter in Germany, working in Hannover, Kassel, Lübeck and Berlin, before travelling to Italy in 1782. He settled first in Rome, drawing Italian landscapes and making copies of classical works of art, and from 1785 onwards lived in Naples. In Italy Kniep was active among the circle of artists around Jacob Philipp Hackert and Johann Heinrich Tischbein, both of whom were a considerable influence on his style. It was through Tischbein that he met Johann Wolfgang von Goethe in Naples, and Kniep accompanied the writer on his voyage through Southern Italy and Sicily, between 1786 and 1788. Unlike many other German artists, however, Kniep continued to live and work in Naples even after the city fell under French rule in 1806. He made numerous highly accurate drawings of the excavations at Paestum and Pompeii, and obtained his livelihood from the sale of his work to local clients and foreign visitors to Rome and Naples. He also taught at the Accademia di Belle Arti in Naples, and published several albums of engravings after his landscape drawings. As the English writer Lord Napier opined, in his Notes on Modern Painting at Naples, published in 1855, ‘Under the intrusive government of the French, the names of Kniep, Voogd, Rebel, Denis, and Huber, were in the greatest repute, and demonstrate how completely the delineation of landscape and pastoral life had been appropriated by alien pencils.’ Despite his long career in Italy and his role as a member of the artistic community in 18th century Rome, Kniep enjoyed only a modest reputation in his own lifetime. As has been noted of the artist, ‘Neither self-obsessed or perhaps talented enough to do more than eke out a living from the commissions of wealthy visitors to Rome, he somehow failed to make his mark, rather like Jacob Asmus Carstens, John Robert Cozens and other foreign draughtsmen who made their way to Italy in this period. His response to the artistic demands and political changes of the time was to escape into idyll and a fastidious adherence to traditional values and techniques.’ Although Kniep’s drawings of ideal classical landscapes have been largely forgotten since his death, the recent publication of both a monograph on the artist and a museum exhibition of his work have done much to bring his oeuvre back to light. Large groups of landscape drawings by Kniep are today in the collections of the Niedersächsisches Landesmuseum in Hannover, the Roemer- und Pelizaeus-Museum in Hildesheim and the Goethe-Nationalmuseum in Weimar, while other examples are in the Rijksmuseum in Amsterdam, the Kupferstichkabinett in Berlin, the Goethe-Museum in Düsseldorf, the Städelsches Kunstinstitut in Frankfurt, the Hamburger Kunsthalle in Hamburg, the Museo Nazionale di San Martino in Naples, the Metropolitan Museum of Art in New York, the Ashmolean Museum in Oxford, the Albertina in Vienna, and elsewhere.