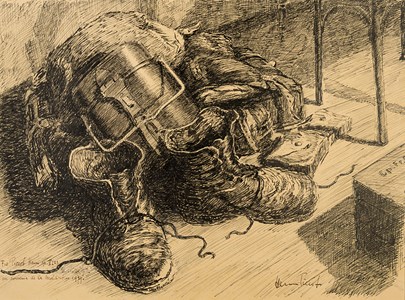 Born into a Swiss family in London, at the age of six Henri Piccot returned with his family to Tavannes in the Bernese Jura region of Switzerland. He studied at the school of art in La Chaux-de-Fonds between 1915 and 1919, and with the financial assistance of a local patron was able to spend a year in Munich, between 1921 and 1922, as an apprentice to an engraver. By 1924 Piccot had settled in Paris, where he was active mainly as a landscape and still life painter, watercolourist and pastellist, exhibiting at the Salon des Indépendants in 1925 and 1928, as well as at a number of Parisian galleries. He also showed his work in the early 1920s in exhibitions in his native canton of Bern in Switzerland; at Delémont, Saint-Imier and La Chaux-de-Fonds. Between 1927 and 1930 Piccot worked as a jewellery designer for the famous house of Janesich in Paris, counting among his clients members of Parisian high society as well as English and European royalty. Late in his career, Piccot also provided book illustrations for the Swiss author Nancy-Nelly Jacquier’s Sanitra, l’enfant de la colline, published in 1971.