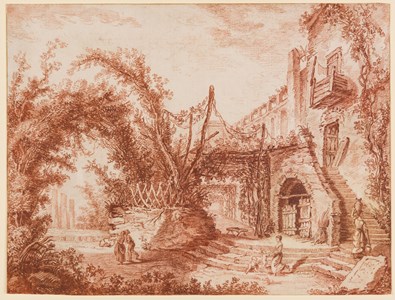 Raised in Switzerland, where his father worked as the architect to the Prince-Bishop of Basel, Pierre-Adrien Pâris enrolled in the Ecole Royale d’Architecture in Paris in 1860, studying under Etienne-Louis Boullée. Although he failed three times to win the Prix de Rome, he was able to study informally at the Académie de France in Rome, where he arrived in 1769. It was there that he met and came under the influence of Jean-Honoré Fragonard, whose drawings were to be a particular inspiration. He travelled extensively in Italy, making a particular study of the Roman ruins at Paestum, Pompeii and Herculaneum. On his return to France in 1774, he began working as an architect and decorator in Paris and elsewhere, and also met Hubert Robert at Versailles. In 1778 he was appointed dessinateur du cabinet du Roi to the King, Louis XVI. Two years later Pâris was admitted into the Académie Royale d’Architecture, and in 1784 was named architect of the Menus Plaisirs du Roi. Among his most significant projects were the decoration of the Opéra and the Elysée Palace in Paris, the construction of the town hall of Neuchâtel in Switzerland, and work on the Cathedral of Orléans. The Revolution found Pâris in semi-retirement, but by 1806 he was back in Italy, working in Rome and Naples and serving as acting director of the French Academy in Rome, while also helping to direct excavations at the Colosseum. He returned to France in 1817, and on his death two years later bequeathed his extensive collection – including sixty drawings by Fragonard - to the museum in his native city of Besançon.