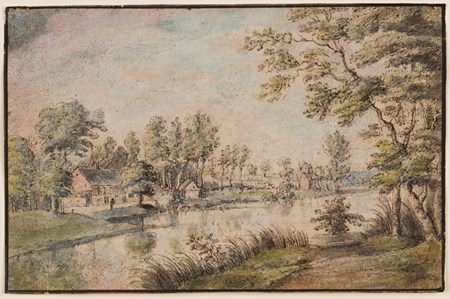 A landscape painter, draughtsman and engraver, Lucas van Uden was probably a pupil of his father Artus. Between 1615 and around 1630 he is supposed to have worked in the studio of Rubens, although this is by no means certain. That he was certainly influenced by the master is evident, however, in the numerous engravings he produced after, or inspired by, paintings by Rubens. By 1628 van Uden was registered at the guild in Antwerp, and it was there that he spent almost the whole of his career, apart from a tour along the Rhine between 1644 and 1646. As a landscape painter, van Uden was at his best working on a relatively small scale. He made a particular speciality of woodland scenes, with the staffage in his compositions usually added by other artists, notably David Teniers and Jacob Jordaens. Van Uden’s biographer Arnold Houbraken noted that he often ‘awoke at the crack of dawn and went out to the fields and the woods’ to draw. A number of the artist’s watercolour drawings, some of which are dated in the 1640s, depict actual topographical views. Only a very few, however, can be identified as preparatory studies for landscape paintings, and most seem to have been produced as finished works of art in their own right, and intended for sale to collectors. Indeed, van Uden may have been best known in his own day for his landscape watercolours of the Flemish countryside; the portrait engraving of the artist in Van Dyck’s Iconografie depicts him holding a landscape drawing.