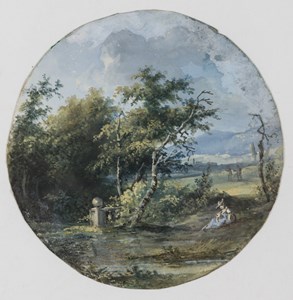 Known as ‘Moreau l’Aîné’ to distinguish him from his younger and more successful brother Jean-Michel Moreau, Louis-Gabriel Moreau was a landscape painter and draughtsman of considerable talent. A pupil of the view painter Pierre-Antoine Demachy, his first exhibited works, shown at the Exposition de la Jeunesse in 1760, were watercolour views of ruins, and this type of subject matter remained a common feature of his work throughout his career. Although he entered the Académie de Saint-Luc in 1774, he was never admitted into the Académie Royale. Nevertheless, Moreau served as painter to the Comte d’Artois, the future Charles X, and was given lodgings in the Louvre. He exhibited at the ‘open’ Salons held between 1797 and 1804, where he showed landscapes of Paris and its environs. Unlike many of his contemporaries, Moreau never seems to have visited Italy, and indeed his landscapes are rather less Italianate than they are typical scenes of the French countryside. Nature, in all its variety, was the artist’s main concern, and in his painted and drawn compositions any figures are always quite small and subordinate to their surroundings. As a draughtsman, Moreau worked primarily in watercolour and gouache, both techniques in which he was able to achieve a remarkable spontaneity and freedom of handling, allowing him to capture effects of light and atmosphere. He also produced a number of landscape etchings.