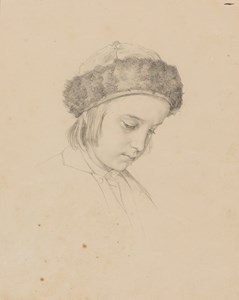 Born in Saxony, the German portrait and landscape painter and draughtsman Eduard Clemens Fechner studied at the Akademie in Dresden under the teachers Josef Grassi and Moritz Retzsch, and completed his training in Munich in the studio of the Neoclassical portrait painter Joseph Karl Stieler. Fechner was particularly admired for his portraits of women and children, and among his patrons was the Duke of Leuchtenberg. In 1825 he settled in Paris, where he established his career. He made his debut at the Salon in 1835 and continued to exhibit there for much of his career, showing mainly portraits in oil and watercolour. He also produced a handful of etchings, including a portrait of the pianist and composer Clara Schumann, to whom he was related by marriage, since his sister was the pianist’s stepmother. Fechner worked in Paris for the remainder of his career, and died there in 1861.