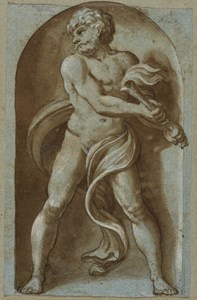 ‘The dominant figure in Netherlandish art around 1600’, as noted by one scholar, the Dutch draughtsman and engraver Hendrick Goltzius began his career as a printmaker. He worked as a pupil and assistant of Dirck Volckertsz. Coornhert, and later as an engraver and designer for the publishing houses of Philips Galle and Aux Quatre Vents in Antwerp. His skill with the burin was recognized from an early age, and around 1580 he began publishing his own prints in Haarlem. These soon came to be avidly collected and, as has been noted, ‘The prints that came off Goltzius’s presses count as some of the finest achievements in the history of graphic art.’ Goltzius was always somewhat sickly, and it was after recovering from a severe illness that lasted some three years that he left Haarlem in November 1590 for an extended stay in Italy, where he made a close study of the works of antiquity and the Renaissance. He spent most of his time in Rome, where he arrived at the beginning of 1591 and stayed for several months. There he produced drawn copies after the paintings and frescoes of Raphael and Polidoro da Caravaggio, as well as numerous drawings of the most celebrated antique sculptures to be found in Rome. He left the city at the beginning of August 1591 and returned to Haarlem via Florence, Bologna, Venice and Munich. Although still in poor health, he continued his highly successful career as an engraver and designer of prints, gaining an Imperial privilege from the Emperor Rudolf II in 1595 and dedicating series of engravings to such notable patrons as Duke Wilhelm V of Bavaria and the Archbishop of Milan, Cardinal Federico Borromeo. Among his pupils and assistants in his printmaking studio were Jacques de Gheyn II, Jan Saenredam, Jan Harmensz. Muller and, not least, his stepson Jacob Matham. Around 1600, at the age of forty-two, Goltzius decided to give up printmaking to embark on a new career as a painter, leaving the print workshop and publishing business to Matham. Goltzius was a highly gifted draughtsman, and over five hundred drawings by him survive. As has been noted of the artist, ‘His technical skill, the virtuosity of his style, and the brilliance and erudition of his inventions in printmaking were matched only by his achievements as a draftsman…Goltzius addressed a wide variety of subjects, from recondite allegories rendered in an extravagant late mannerist mode to precise, naturalistic studies of landscapes, animals, and plants. He experimented with most of the drawing media available to him, including red and black chalks, colored chalks, ink and wash, watercolor and gouache, and metalpoint.’