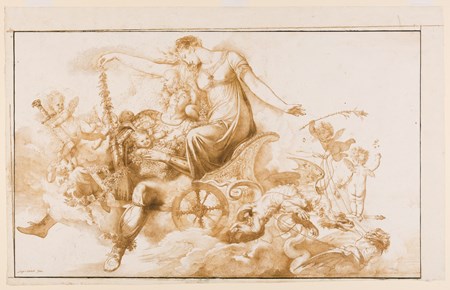 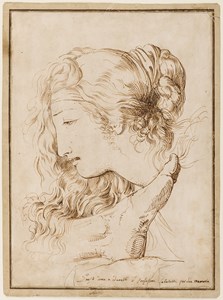 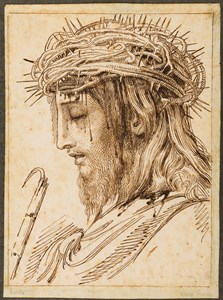 From almost the very beginning of his career, Luigi Sabatelli enjoyed the patronage and support of a number of important figures. The first of these was the Marchese Pier Roberto Capponi, whose financial backing allowed the young artist to study at the Accademia di Belle Arti in Florence and to continue his training in Rome and Venice, between 1789 and 1797. Another significant patron was the Pisan collector Tommaso Puccini, a future director of the Uffizi, who commissioned a series of highly finished drawings of literary subjects from the artist. In Rome in the early 1790s Sabatelli studied with the painter Domenico Corvi, and was also a frequent participant in the informal drawing study sessions hosted by Felice Giani at his studio, known as the Accademia dei Pensieri. He met and exchanged ideas with several of the Italian and foreign artists working in the city, notably Vincenzo Camuccini, Giuseppe Bossi and François-Xavier Fabre. Returning to Florence in 1797, Sabatelli began working as a fresco painter, decorating several churches and the palazzi of the Gerini, Bardi, Spinelli, Tempi, Bartolommei and Guicciardini families. He also produced portrait drawings in pen and ink of members of his own family and those of several noble Florentine families, as well as many of the significant figures in the cultural life of Florence at the onset of the 19th century. In 1808 Sabatelli was appointed a professor of painting at the Accademia di Brera in Milan, where he lived and worked for the remainder of his long career. Although he executed many decorative projects in Milan and throughout Lombardy, he continued to work occasionally in his native Florence, notably between 1820 and 1825, when he painted the frescoes in the Sala dell’Iliade in the Palazzo Pitti. These show the influence of Jean-Auguste-Dominique Ingres, who was in Florence around this time and with whom Sabatelli became friendly. (The influence of Ingres is similarly evident in the Italian artist’s portrait drawings of this period.) Sabatelli worked in the church of San Filippo Neri in 1830 and undertook the decoration of the Tribuna di Galileo in the Palazzo della Specola, completed in 1841. He also illustrated a History of Florence, written by Prince Louis Napoleon Bonaparte and printed in 1833. A talented printmaker in his own right, Sabatelli also provided finished drawings for other engravers. Among his engraved designs are the series of Pensieri diversi, published in Rome in 1795, and The Plague of Florence, inspired by Boccaccio’s Decameron and published in 1801.