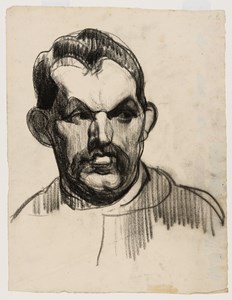 Born in Milton in County Roscommon, the Irish artist Roderic Anthony O’Conor trained at the Metropolitan School of Art in Dublin, between 1879 and 1881 and again between 1882 and 1883. He continued his studies at the Académie Royale des Beaux-Arts in Antwerp in 1883 and 1884, before entering the atelier of Carolus-Duran in Paris. Although he sent works to the Paris Salons of 1888 and 1889, he eventually abandoned his academic training in favour of an association with more avant-garde artists. In 1889 he exhibited three works at the Salon des Indépendants (as did the then-unknown Van Gogh, who was to be an influence on O’Conor’s work), and he showed there again in 1890 and 1892. Perhaps at the suggestion of John Lavery, O’Conor spent the summers of 1889 and 1890 in the artist’s colony at Grez-sur-Loing, south of Paris, and by 1890 was living and working in Brittany, mainly at Pont-Aven but also at nearby Le Pouldu. At Pont-Aven he became part of the circle of artists active in the town, which included Cuno Amiet, Emile Bernard, Charles Filiger, Paul Gauguin and Armand Séguin, with whom he was especially close. His friendship with Gauguin was also close, and Gauguin even invited him to join him on his trip to Tahiti, but O’Conor refused the offer. O’Conor was to remain in Brittany for several years, with only occasional trips to Paris and two visits to London. He exhibited in group shows at the gallery Le Barc de Boutteville in Paris in 1894 and 1895, and with the group Le Libre Esthétique in Brussels in 1898. Soon after the death of his good friend Séguin in 1903, O’Conor left Brittany and settled in Paris, moving into a studio in Montparnasse where he was to work for the next thirty years. He exhibited at the Salon d’Automne and the Salon des Indépendants, showing landscapes, nudes, still life subjects and the occasional portrait. Financially independent, O’Conor did not need to make a living from his painting, and was often reluctant to sell his work, even to friends. (He also turned down the opportunity to be represented by the dealer Clovis Sagot.) He only exhibited a handful of paintings a year, and rarely allowed anyone to see the numerous works in his studio. In 1933 he married his former model and mistress Henriette Maria (known as Renée) Honta, and settled in Neuil-sur-Layon in western France. It was not until four years later, in 1937, that he had his first one-man exhibition, at the Galerie Bonaparte in Paris, which comprised fifteen paintings and a handful of drawings. In 1956, after the death of Renée Honta, the contents of O’Conor’s studio, including a large number of his paintings and drawings as well as works by other artists, was dispersed at auction in Paris. A significant proportion of the work was acquired by the gallery Roland, Browse and Delbanco in London.