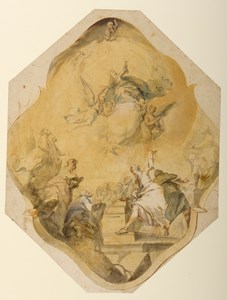 One of the leading German artists of the Late Baroque period, Franz Anton Maulbertsch worked throughout Central Europe during the second half of the 18th century. Born in Langenargen on the shores of Lake Constance, he was in Vienna by 1739, when he enrolled in the Vienna Akademie, and he was to live there for the remainder of his career. His first altarpieces are datable to 1748, and already in such early works as the illusionistic cupola fresco of The Assumption of the Virgin in the Piarist church of Maria Treu in Vienna, painted between 1752 and 1753, Maulbertsch’s distinctive style, bold colouring and confident manner are evident. (As one scholar has aptly noted of this fresco, ‘Maulbertsch creates fireworks in paint; the Virgin ascends to heaven as if rocketing upward on a cloud. The whole is a burst of movement. Color seems to explode out of light and streams down from the ceiling.’) Employed by many different religious orders, Maulbertsch painted altarpieces and frescoes – works characterized by a ‘poetic individuality and atmospheric subtlety of light and colour’, in the words of Klára Garas - for numerous monasteries and churches in Germany, Austria, Bohemia, Moravia and Hungary throughout his long and celebrated career. Among his finest works of the 1750s are the frescoes for the summer residence of the Archbishop of Olomouc at Kroměříž, painted in 1759. Maulbertsch also worked for the Imperial Habsburg court in Vienna and Innsbruck, and produced a number of paintings of mythological subjects, as well as a handful of genre scenes, for other private patrons. From the middle of the 1770s onwards, Maulbertsch worked frequently in Hungary and modern-day Slovakia, receiving several important commissions from Hungarian prelates and noblemen. A significant proportion of Maulbertsch’s output was destroyed during the Second World War, and much of what survives is found in parts of Central Europe far from the main artistic centres. As a result, his work was not properly studied until the second half of the last century, but he is today regarded as one of the leading fresco painters of the 18th century, and a colourist on a par with Giambattista Tiepolo. Despite his extensive output as a mural painter, and the existence of a fairly large number of preparatory oil sketches by the artist, relatively few drawings by Maulbertsch survive today. When the contents of his house were sold, the year after his death, no drawings by him were noted, although some sheets by fellow artists were listed. Indeed, in terms of preparing his compositions, Maulbertsch appears to have tended to work through oil sketches, or directly on the painted surface, than with a large number of preliminary studies. Drawings by Maulbertsch are in the Harvard University Art Museums in Cambridge, MA, the Albertina in Vienna, the Biblioteka Zaklad Narodowy im. Ossolinskich in Wroclaw, and elsewhere