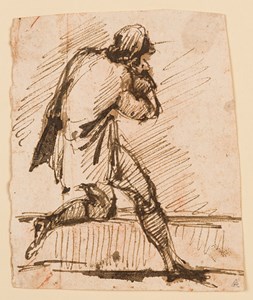 From his first visit to Rome in 1740, Giambattista Piranesi was interested in architecture and stage design, which he had studied in the studio of Domenico and Giuseppe Valeriani. By 1743 he had settled in Rome, and that year published etchings of several of his architectural designs as the Prima parte de architetture e prospettive, in which he adapted antique Roman forms into a modern, more unrestrained idiom, partly inspired by his early interest in stage design. Piranesi’s most celebrated works, the Le carceri (1743-1746) and Le antichita romane (1756) came soon afterwards. With the accession of the Venetian Carlo Rezzonico to the papacy as Pope Clement XIII in 1758, Piranesi was at last able to put some of his architectural theories to practice. The papal court provided important commissions to Venetian artists, chief among them Piranesi. In 1764 he was commissioned by the Pope’s nephew, Cardinal Giovanni Battista Rezzonico, to oversee the restoration of the church of Santa Maria del Priorato on the Aventine hill, and at around the same time was asked to draw up plans for the rebuilding of the west end of the Basilica of San Giovanni Laterano. His last years were spent making drawings of the antiquities discovered at Pompeii and Herculaneum, some of which were later engraved by his son Francesco.