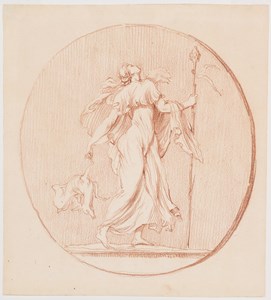 Johan Tobias Sergel was, like his younger contemporaries Antonio Canova, Bertel Thorvaldsen and John Flaxman, also a talented and prolific draughtsman. In 1756 he entered the studio of Pierre Hubert L’Archevêque, then the foremost sculptor in Sweden. His apprenticeship with L’Archevêque lasted about ten years, during which time he became the French sculptor's chief assistant. In 1767, at the age of twenty-seven, Sergel arrived in Rome on a royal stipend. He remained in Italy for eleven years, eventually moving away from the decorative Rococo style of his training with L’Archevêque in favour of a nascent Neoclassicism. In Rome Sergel become friendly with the Swiss painter Johann Heinrich Fuseli, and earned a number of important sculptural commissions that brought him great renown. Among his most famous Roman works was a Reclining Faun, executed around 1770, which was greatly admired and of which a version was acquired for the Swedish Royal collection. He enjoyed the patronage and support of several significant connoisseurs, not least Sir William Hamilton in Naples, who described Sergel to the Comte d’Angiviller as ‘not only the foremost sculptor now working in the whole world but…also the greatest since the days of Michelangelo.’ Apart from his sculptures of classical and mythological subjects, Sergel produced a great number of drawings during his time in Italy; studies for sculpture (usually in red chalk, and close in style to the drawings of Edmé Bouchardon), and a far more numerous group of free and expressive pen sketches of figures and scenes from contemporary Roman life, as well as caricatures of fellow artists and friends. Summoned back to Sweden by King Gustav III in 1779, Sergel found that despite his desire to create monumental works in sculpture, only a few important official commissions were available, and much of the remainder of his career was spent executing portrait busts and medallions for private patrons. The richest and most varied artistic expression of his art at this period, therefore, continued to be found in his drawings. A passionate observer of the contempo¬rary scene, Sergel made numerous sketches of aristocratic parties, artists’ gatherings, princely balls and other festivities. With their bold washes and spirited penmanship, these drawings - many of them in the form of caricatures - display the artist’s inventiveness and imagination to great effect, and rank among his finest achievements. As one scholar, writing in 1943, noted, ‘Altogether, the prolific pen of Sergel, through these marvelously vivid caricatures – done, in the intimacy of his home, for his friends and not for publicity - created a magnificent gallery of his contemporaries, a treasure house of pictures valuable as documents and iconographically, but above all artistically. Sergel the draughtsman must not be wholly eclipsed by Sergel the sculptor. His spontaneously improvised drawings help to complete the picture of the great Swedish sculptor.’ Sergel died in 1814, at the age of seventy-four.