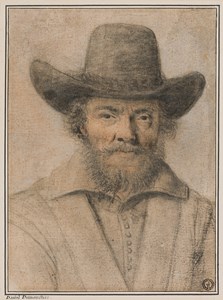 Nicolas LAGNEAU (Active in the first half of the 17th century)

Very little is known about the French draughtsman Nicolas Lagneau (or Lanneau), an artist to whom a distinctive series of chalk drawings of portraits and fantastical or caricature-like heads have long been attributed. The years of the artist’s birth and death remain a mystery, and almost nothing is known of his background and training as an artist. A handful of drawings by Lagneau bear dates in the 1620s, and it is generally believed that the artist worked in Paris in the first half of the 17th century. The 1666 estate inventory of the obscure painter Jean Leblond notes the presence in his collection of some drawings by Lagneau, while in his Le livre des peintres et des graveurs, published in 1672, the print collector and translator Michel de Marolles, known as the Abbé de Marolles, noted the existence of a certain ‘Lanneau’, some of whose drawings he also owned. In 1677 Marolles sold an album of more than seventy portrait drawings by this artist to King Louis XIV; these are today in the collection of the Bibliothèque Nationale in Paris. Lagneau’s drawings can be seen as part of a tradition of portraiture beginning in the 16th century with Jean Clouet and continuing through the work of such artists as François Quesnel, Daniel Dumoustier (to whom this drawing was once attributed) and Robert Nanteuil, and on well into the 18th century. As has recently been noted of his drawings, ‘Lagneau renders facial features as objectively as possible – whether in profile or full face – on a neutral ground. The sheets are generally large. The artist uses black and red chalks and watercolor...In many of Lagneau’s sheets, the sculptural character – enhanced with the matte colors of pastels – is manifest.’ It is possible that some of Lagneau’s more caricature-like drawings may have been made from his imagination, rather than from a posed model. Also evident in his oeuvre is an interest in grotesque or unusual physiognomies.