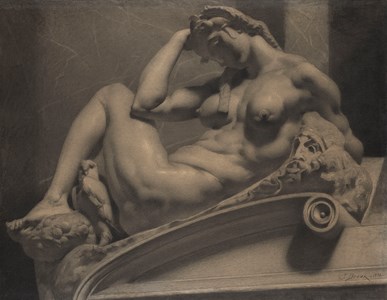 A student at the Ecole des Arts Décoratifs from 1886, Silas-Auguste Broux was a pupil of Jules-Elie Delaunay and Gustave Moreau, and won a first prize medal in a life drawing competition. He first exhibited at the Salon des Artistes Français in 1891 and continued to do so until 1956, showing portraits, landscapes, city views and still life subjects. In 1896 he was appointed a professor of drawing at the Ecole Nationale des Arts Industriels in his native Roubaix, and in later years worked as a drawing teacher in Alençon, where he also served as a curator in the local museum. During this period he produced a number of picturesque watercolours of Alençon. Several works by Silas Broux are today in the collections of the museums of Roubaix and Alençon.