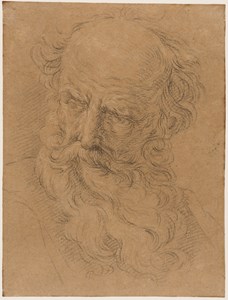 Following a period in the studio of Giacomo Cavedone, Flaminio Torre (or Torri, and also known as Flaminio degli Ancinelli) completed his apprenticeship with Simone Cantarini. Torre’s first known dated work is an etching of 1639 in which, as in such early paintings as the Adoration of the Magi in San Giuseppe in Bologna, the influence of his master is readily evident. In 1647, he painted a decorative fresco border for an altarpiece in the church of San Filippo Benizzi in Bologna, begun by Cantarini and completed by Francesco Albani. With the death of Simone Cantarini in 1648, Torre inherited his studio. Around 1650 he painted a Vision of Saint Anthony of Padua for the church of the Osservanza in Imola; this was a relatively rare example of a public commission, since much of Torre’s work was made up of devotional pictures for private patrons. He settled in Modena by 1658, where he was employed at the Ducal court of Alfonso I d’Este as curator of the Galleria Estense. He lived in Modena for the remainder of his life, although the absence of any dated paintings from this period suggests that he painted very little after leaving Bologna. Torre seems to have drawn mainly in red chalk, with a distinctive style which reflects the particular influence of Cantarini’s draughtsmanship. Indeed, the drawings of the two artists have often been confused. As his biographer Cesare Malvasia noted, Torre ‘disegnò mirabilmente, e i suoi segni non furono così rotti come que’ del Pesarese [ie. Cantarini], ma più interi, seguiti e sicuri’. A later historian, Luigi Lanzi, added that ‘il suo gran talento fu imitare perfettamente e senza stento qualunque maniera; onde le sue copie furono pregiate quanto gli originali de’ grandi autori, e talvolta più.’