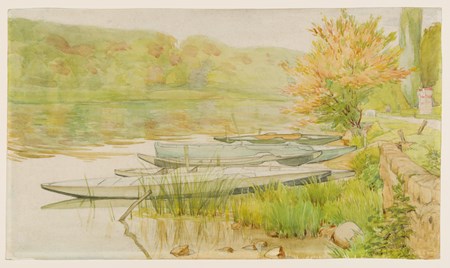 Born into a family of Swiss artists, Léo-Paul-Samuel Robert was the son of the painter Aurèle Robert and nephew of the genre painter Léopold Robert. He was trained in the studio of Julius Naue at the Kunstakademie in Munich, and also studied in Florence and Paris. Robert exhibited at the Salon for the first time in 1877, winning a gold medal for his painting The Zephyrs of a Beautiful Evening, now in the Musée d’art et d’histoire in Neuchâtel. The next year he won a silver medal at the Exposition Universelle in Paris. A Symbolist for the early part of his career, Robert filled canvases and drawings with depictions of goddesses and fairies, and drew on music by composers such as Schubert and Beethoven for inspiration. In 1883 Robert visited Palestine, and after spending a year there his artistic production shifted away from Symbolism towards a more religious sentiment. This is reflected in what is perhaps his best-known work; three monumental murals for the stairwell of the museum in Neuchâtel. Measuring seven meters by nearly six meters, the paintings took the artist eight years to complete. As well as painting decorative murals for such public buildings as the museums of Neuchâtel and Bern, Robert established a reputation as a landscape painter later in his career, while also developing a particular speciality as a painter of birds and caterpillars. His sons Paul-André and Philippe were also active as botanical and natural history artists, and a large group of works by the Robert family is today in the collection of the Neues Museum in the artist’s native town of Biel/Bienne in Switzerland.