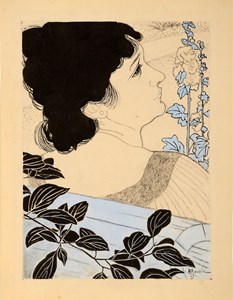 A painter, draughtsman, poster designer, caricaturist and illustrator, Auguste Jean Baptiste Roubille exhibited his watercolours and gouaches at the Salon des Indépendants and the Salon d’Automne, as well as the Salon des Humoristes, for which he also designed several posters. Roubille was an extremely versatile artist, at times working in an imposing Nabis manner and at others in a more traditional illustrative style. As an illustrator, his métier lay in satire, both of a political and comedic nature. His first illustrations appeared in Les Temps nouveaux in 1896 and the Courrier français in 1897, and his drawings, illustrations and cartoons later appeared in such publications as Le Rire, Cocorico, Le Canard Sauvage, Le Sourire and Le Cri de Paris, while from 1906 until 1933 he provided cover illustrations for the satirical magazine Fantasio. Although best known for his cartoons and drawings of comical subjects, Roubille’s skill as a draughtsman was evident in all his work. Furthermore, as one contemporary writer noted, ‘In mentioning at random the names of distinguished artists most popularly known in France by drawings of a humorous nature, that of Auguste Roubille will unhesitatingly be included. Despite the jesting character of his drawings on the covers as well as the inside of various jocular journals, he is nevertheless an artist with a profound sincerity of thought, and his work perhaps gets nearer to the true relation of art to life than much which pedantically poses with a superficial seriousness in massive gold frames.’ Roubille painted a decorative frieze for the Maison du Rire pavilion at the Exposition Universelle of 1900, as well as a series of wall panels for the fashionable Café d’Harcourt near the Sorbonne. He produced several advertising images as posters, and also provided illustrations for a handful of books, including Paul Feuillâtre’s Écho et Narcisse and Grandgoujon by René Benjamin. Like several of his contemporaries, including Théophile-Alexandre Steinlen and Kees van Dongen, Roubille worked with anarchist publications, notably the illustrated weekly L’Assiette au Beurre, with which he was closely associated between 1901 and 1905. This allowed him to further his mission, within the bounds of political satire, of illuminating the injustices of state violence and the oppression of workers.