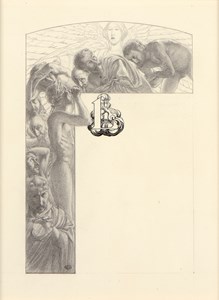 The Swiss painter, printmaker and illustrator Carlos Schwabe studied at the Ecole des Arts Industriels in Geneva before settling in Paris, where he worked as a designer of wallpaper. He soon joined the circle of Symbolist artists, writers and musicians in the city, and in 1892 was a participant in the inaugural Salon de la Rose + Croix, organized by the eccentric Symbolist novelist and critic Joséphin (‘Sâr’) Péladan at the Galerie Durand-Ruel, for which Schwabe designed the exhibition poster. (He did not, however, take part in any of the five later Salons de la Rose + Croix.) Schwabe’s paintings were largely devoted to allegorical or mythological themes, often centred around images of women, as well as mystical religious subjects and scenes of death, all rendered with a distinctive and unusual visual iconography. The 1920s found Schwabe working as an academic portraitist and landscape painter, while still producing works in a Symbolist vein. Admired for his highly refined draughtsmanship, Schwabe was a leading illustrator of the Symbolist movement, and was much praised by critics for his revolutionary and original designs. His reputation in this field was established by a series of illustrations for Catulle Mendès’s L’Evangile de l’Enfance on which he worked between 1890 and 1892, and which first appeared as a series published in the Revue Illustrée between 1891 and 1894. Among the books for which Schwabe provided drawings were editions of Emile Zola’s Le rêve and Maurice Maeterlinck’s Pelléas et Mélisande, both published in 1892, and Charles Beaudelaire’s Les Fleurs du mal, which appeared in 1900, as well as works by Edmond Haraucourt, Stéphane Mallarmé and Albert Samain. As the scholar Philippe Julian has noted of Schwabe, ‘His illustrations rank among the masterpieces of Art Nouveau, and his border designs, overgrown with an exotic vegetation, are far superior in their convolutions to those of Mucha and less restrained than those of Eugène Grasset, the reformer of typography.’ Schwabe worked very slowly, and the purity of line and level of detail readily evident in his drawings and watercolours led to contemporary comparisons with the artists of the Renaissance in Italy and Germany. He exhibited drawings, watercolours and prints at the Salons of the Société Nationale des Beaux-Arts and the Salon d’Automne, and won a gold medal at the Exposition Universelle of 1900. He also took part in exhibitions in Austria, Germany, Belgium and Switzerland. Important collections of his work are in the Musée d’Orsay in Paris and the Musée d’Art et d’Histoire in Geneva, as well as the Royal Museums of Fine Arts in Brussels and the Van Gogh Museum in Amsterdam.