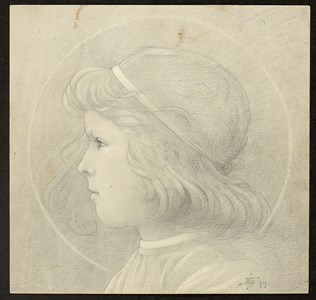 A painter, engraver, ceramicist and sometime architect, Augusto Sezanne studied at the Accademia di Belle Arti in Bologna, under Gaetano Lodi. He lived and worked in Bologna in the first part of his career, serving as professor of ornamental decoration at the Accademia in Bologna between 1882 and 1893. He first exhibited a painting, entitled Requiem, at the Esposizione di Belle Arti in Turin in 1880, soon followed by later submissions of landscape paintings to exhibitions in Milan, Florence, Rome, Venice and Bologna. His work appeared in the art magazine Emporium and also in the yearly review Novissima. In 1893 Sezanne moved to Venice, where he taught at the Accademia di Belle Arti and exhibited at the first Biennale in 1895, and two years later served on the planning committee of the next Biennale, for which he also designed posters. In 1898 he joined the Aemilia Ars society, an applied arts manufactory founded in Bologna, to which contributed designs for furniture, ceramics and stained-glass windows, often decorated with floral motifs. Sezanne worked on the interior decoration of various buildings in Bologna and Trentino, and as an architect designed the Casa Stagni in Bologna between 1880 and 1892, as well as the Palazzina Majani, also in Bologna, completed in 1908. He also designed a number of sepulchral monuments for the cemetery of the Certosa of Bologna. A solo exhibition of Sezanne’s work was held at the Venice Biennale of 1912, the same year that he designed a stamp commemorating the reconstruction of the Campanile of the Piazza San Marco in Venice.