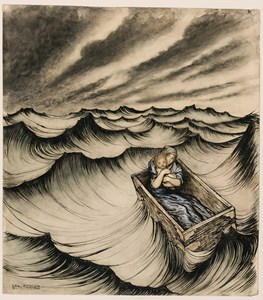 One of the famous and best-loved illustrators of his day, with a successful career which lasted for over forty years, Arthur Rackham provided illustrations for around 150 books and produced some 3,000 watercolours and drawings. He drew from a very early age, and soon after enrolling in evening classes at the Lambeth School of Art in 1884 began contributing illustrations to various newspapers and illustrated magazines such as The Westminster Budget and the Pall Mall Budget. His first real success, however, came with his illustrations for an edition of Grimm’s Fairy Tales, published in 1900, which led to many further projects, including editions of Peter Pan, Gulliver's Travels, Rip Van Winkle, A Midsummer Night's Dream and Andersen's Fairy Tales. Rackham’s superb technique and imaginative compositions were greatly admired, and his reputation as an illustrator, particularly of children’s books and fairy tales, was second to none. He exhibited his watercolours at both the Royal Academy and the Royal Society of Painters in Water-Colours, and won medals at exhibitions in Milan in 1906 and Barcelona in 1911. He also showed his drawings yearly at the Leicester Galleries in London, between 1906 and 1913. In 1912 Rackham was honoured with a retrospective exhibition at the Societé Nationale des Beaux-Arts in Paris, and in 1919 was named a Master of the Art Workers Guild. By the 1920s Rackham’s work had become extremely popular in America, and he began to sell his original drawings through the Scott & Fowles gallery in New York, as well as receiving commission for advertising images. He only paid one visit to America, however, in 1927. In the 1930s his new publisher, George Harrap, began producing books made with less expensive paper and with the illustrations printed and bound with the text rather than tipped-in separately. Rackham’s last commission, from an American publisher, was for sixteen illustrations for an edition of Kenneth Grahame’s The Wind in the Willows, published in 1940, after the artist’s death. Rackham’s draughtsmanship was praised by his contemporaries, who elected him to the Royal Society of Painters in Water-Colours on his first application, as well as by art critics, one of whom wrote in 1906 that ‘His admirable originality and exquisite technical skill have, within the last few years, gained him an assured place in the front rank of our water-colourists and draughtsmen; and to this place he has come not by fortunate accident, nor by the influence of powerful patrons, but solely by his own exertions...As a craftsman he has an extraordinary command over refinements of expression, a perfection of touch and a delicacy of hand which give rare distinction to everything he produces, and which, nevertheless, do not prevent him from attaining, when his subject requires it, the most satisfying vigour and decision. But in addition to this executive skill he has a faculty for seizing immediately upon the imaginative possibilities of the material he is considering.’