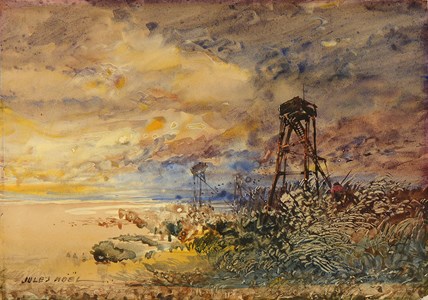 Born Louis Assez Noël, the landscape and maritime painter and watercolourist Jules Noël studied in Brest and Paris, where he trained with the landscape painter Jean-Victor Bertin. He worked for much of his career in Brittany and Normandy, at first supplementing his income by teaching drawing in Saint-Pol-de-Léon, Lorient and Nantes, where he exhibited his paintings for the first time in 1836. Noël spent much time working in the port of Brest, painting views of the harbour and shipping. He made his Salon debut in Paris in 1840, exhibiting a seascape. Noël eventually attracted the patronage of the Duc de Nemours, who in 1843 commissioned a painting of the Duke and his wife embarking on a ship at Brest. Three years later, in a review of the Salon of 1846, Charles Beaudelaire noted of a seascape by the artist that ‘M. Jules Noël has made a very beautiful marine, of a beautiful and clear radiant and cheerful colour.’ In 1847, through the Duc de Nemours, Noël obtained a post as a Professor of Design at the Lycée Henri-IV in Paris. (He continued to teach there until his retirement in 1879, and among his students was Félix Buhot.) During school vacations he would return to Brittany or Normandy to paint, working at Brest, Dieppe, Douarnenez, Fécamp, Landerneau, Le Tréport, Morlaix, Quimper, Roscoff and elsewhere. An auction of thirty of his paintings at the Hôtel Drouot in Paris in 1860 was a success. In 1875 he spent some time in Switzerland. Noël exhibited his work yearly at the Salons until 1879, as well as at the Exposition Univerelle of 1867. In ill health after his retirement, he settled in Algeria with his daughter and son-in-law, and died at Mustafa, near Algiers, in 1881. Paintings by Noël are today in the museums of Brest, Quimper, Lille, Vannes and Versailles, as well as the National Maritime Museum in London. A major exhibition of Noël’s work was mounted at the Musée des Beaux-Arts in Quimper in 2005.