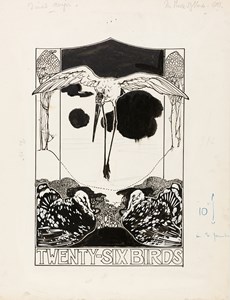 Born near Glasgow, Frederick Carton Moore-Park studied at the Glasgow School of Art, under Professor Francis Henry (‘Fra’) Newbery between 1893 and 1897, where his fellow pupils included Jessie Marion King. He was best known for his drawings, prints and illustrations of animal subjects, which first appeared in the 1890s in the Glasgow Weekly Citizen and Saint Mungo. In 1897 he exhibited a drawing of a bear at the Glasgow Students’ Club, which brought him to the attention of the publishers Blackie & Sons. From them he received a commission to illustrate An Alphabet of Animals, which appeared in 1898 and was a critical and commercial success. By the first years of the 20th century Moore-Park had established a reputation as an illustrator, and as early as 1900, in one of the first published articles about the young artist, one critic could write that ‘Few artists of twenty-five are…less immature than Carton Moore Park, and although it would be gratuitously indiscreet to prophesy what he may or may not do, his work already achieves such a degree of accomplishment that we may fairly discuss it definitely now for what it now is, rather than for what it promises in the future…To great natural gifts he adds the power of taking infinite pains and an enthusiastic love of his craft. His gifts are not of the kind which are at any man’s beck and call.’ Much influenced by Japanese wood engravings, Moore-Park’s work appeared in several illustrated children’s books, including A Book of Birds (1900), The Dog Book (1902), The King of the Beasts (1904), The Fables of La Fontaine (1905), The Wonders of the Insect World (1906), The Children’s Story of the Bee (1909) and Biffel - A Trek Ox (1909). As the contemporary critic Charles Hiatt wrote of Moore-Park’s work, ‘His drawings evidenced a very remarkable degree of originality and a sincerity not often found in conjunction with it. His studies of all sorts of beasts, from the mouse to the elephant, are characterized by accurate anatomical knowledge, as well as a profound appreciation of the nicest details of the habits and movements of the animals depicted…His treatment is refreshingly broad and invariably decorative…It is by his genuine decorative instinct, added to minute and extraordinary knowledge of animals and their ways, that all his work, whether on a large or on a small scale, is distinguished.’ Moore-Park lived in London until 1910, when he emigrated to New York, where he illustrated Uncle Remus and other books. Works by Moore-Park are in the collections of the Tate and the National Portrait Gallery in London, the Museum of the City of New York, the Museum of Fine Arts in Boston, and elsewhere.