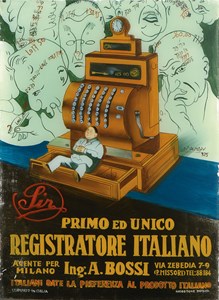 Active as a painter, sculptor and printmaker, but first and foremost an illustrator and poster designer, Achille-Lucien Mauzan enjoyed a highly successful career as a commercial artist, working between Paris, Milan and Argentina. Born in southeastern France, Mauzan displayed a proficiency in drawing from a young age. Upon finishing his studies in Lyon in 1905, he moved to Milan and opened a typography and graphic design shop, contracting his services to several small companies. Mauzan also produced a large number of posters for the nascent Italian film industry in Turin, as well as for the music publishing company Ricordi in Milan. In 1919 the Italian printers and publishers Maga engaged Mauzan as an artist with a contract to both of the company’s showrooms in Paris and Milan. In its prime, Maga was home to many of the leading French and Italian illustrators of the day, including Leonetto Cappiello, Mario and Severo Pozzati and Marcello Nizzoli. Mauzan became integral to Maga’s international prestige, though the relationship broke down after a few years, with the artist terminating their contract in 1923. Mauzan then started up a new publishing house, Mauzan Morzenti, with Angelo Morzenti as a partner. After a very successful tenure in Italy, where he produced a series of vibrant and striking movie, theatre and advertising posters, books and postcards, Mauzan moved to Buenos Aires in 1927. In Argentina he established the firm of Affiches Mauzan, and continued to work with much success as a graphic artist, particularly in the field of advertising posters, where he enjoyed a contract with the Cosmos agency, the largest in South America. The hundreds of posters Mauzan produced during his five years in Argentina were to have a lasting influence on the graphic arts in the country. In 1932 Mauzan returned to France, where he was under contract with the Société Générale Publicité and Paris-Affiche, and spent the last few years of his life working as a painter.