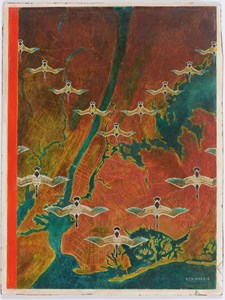 Born in Chile to British parents, the artist and animator Reginald Massie emigrated with his family to America as a child, settling in Oakland. He studied at the University of California at Berkeley but abandoned his studies in 1933 to take a training job with Walt Disney Studios. He worked at Disney off and on for several years, while also working freelance and, for a brief period, at Screen Gems and United Productions of America. Following the U.S. entry into the Second World War Massie enrolled in the Army, where he was commissioned as a staff sergeant and given charge of effects animation for the Signal Corps Photographic Center in Long Island. During the war, Massie produced several training films, assisted Frank Capra on the series of films Why We Fight, and also worked with John Huston on the documentary film The Battle of San Pietro, released in 1945. After the war, Massie returned to Screen Gems and worked as an animator on several Puppetoons productions for the animator and producer George Pal, notably Jasper in a Jam and John Henry and the Inky-Poo, both released in 1946, and Variety Girl and Tubby the Tuba, which appeared the following year. After moving to the East coast, Massie worked as a freelance illustrator for magazines and also became the art director of Gourmet magazine. He died of pneumonia in 1989.