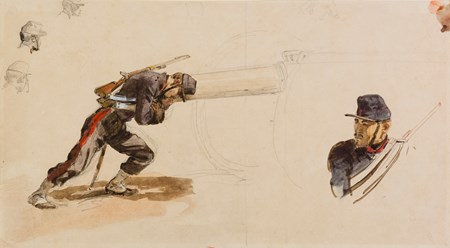 Born into a family of artists, Isidore-Alexandre-Augustin Pils was a student of François-Edouard Picot at the Ecole des Beaux-Arts. He won the Prix de Rome in 1838 and spent the next five years in Italy, until 1844. The early part of his career was taken up with mostly religious subjects, although he began to paint military scenes after the Crimean war, in which he acted as an observer. His success as a military painter led to further commissions, including a number of paintings for Napoleon III. One of the artist’s most important paintings, Soldiers Distributing Bread and Soup to the Poor, was commissioned by the State for the sum of 4,000 francs and was exhibited at the Salon of 1852. (The painting has since been lost, and is known only through a lithographic reproduction.) In 1857 a large canvas of a major Crimean episode, The Passage of the River Alma, was commissioned for Versailles. Pils was also interested in scenes from modern history, exemplified by his famous painting of Rouget de Lisle Singing the 'Marseillaise', exhibited to popular acclaim at the Salon of 1849. Pils also executed a number of paintings for Parisian churches - notably the decoration of the chapel of Saint André in the church of Saint Eustache, painted between 1849 and 1852 and still in situ - and took part in the mural decoration of the Opéra. In 1864 he was appointed a Professor at the École des Beaux-Arts, and made several watercolours of life in Paris during the Prussian siege of the city in 1871. Pils made numerous drawings, watercolours and oil sketches in preparation for each of his paintings, and particularly for individual figures within the composition. He made his first watercolours of military subjects in the early 1850s, when he began to make studies of soldiers encamped at Vincennes, near Paris.