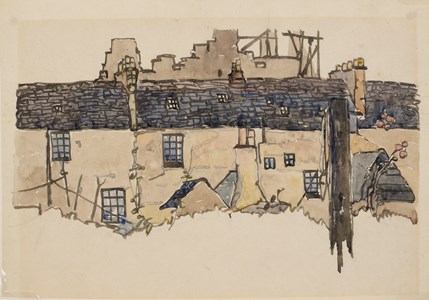 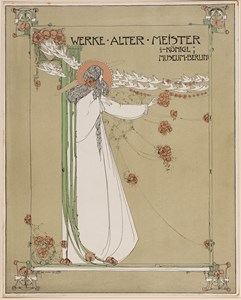 Born in Dunbartonshire, Jessie Marion King studied at Glasgow University and the Glasgow School of Art, under Francis Henry (‘Fra’) Newbery, in the early 1890s, where she concentrated on drawing and illustration. In 1898 she won a silver medal in the South Kensington National Art Competition, and also won a travelling scholarship that allowed her to visit France and Italy. By this time she was much admired for her highly individual illustrative style, characterized by a pen and ink technique reminiscent of the work of Aubrey Beardsley, whom she admired. In 1899 King joined the staff of the Glasgow School of Art, teaching book decoration and design. By 1902 she was the subject of an admiring article in the magazine The Studio and had won a gold medal in the category of book design at the International Exhibition of Decorative Art in Turin. Two years later she gained a commission to produce ninety-five illustrations for William Morris’s The Defence of Guinevere and Other Poems, and she continued to work as an illustrator in later years. King’s work in the years between 1898 and 1905 were characterized by fine detail and meticulous technique. Her compositions were sometimes heightened with gold, while many of her drawings and illustrations were executed on vellum. She also worked as a designer of textiles, jewellery, wallpaper, posters, wall tiles, theatrical costumes, ceramics and book covers. In 1908 King married a fellow artist, Ernest Archibald Taylor, and the following year an exhibition of her drawings and watercolours of France, Germany and Scotland was mounted. In 1911 the couple moved to Paris, where they soon established an art school known as the Shealing Atelier. Living in Montmartre, they became friendly with several artists working in Paris at this time, including Henri Matisse, Maurice Utrillo and Théophile-Alexandre Steinlen, as well as fellow Scots Samuel John Peploe and John Duncan Fergusson. King was particularly influenced by the work of Leon Bakst and his designs for costumes for the Ballets Russes, and her work became stronger in colour and line. With the outbreak of the First World War, King and Taylor moved back to Scotland, living near Kirkcudbright and setting up a summer school on Arran. In 1915 King drew sixteen colour illustrations for Oscar Wilde’s House of Pomegranates, and in later years produced landscape paintings and designs for batik fabrics. Although King remained active for the remainder of her career, she died in relative obscurity in August 1949. A reassessment of her oeuvre, however, began in the 1970s, when commemorative exhibitions were held in Glasgow in 1971, at the National Library of Scotland in Edinburgh in 1971 and 1978, and at the Fine Art Society in 1971. In June 1977, in the midst of this series of exhibitions, the remains of the contents of King’s studio were dispersed at auction in Glasgow.