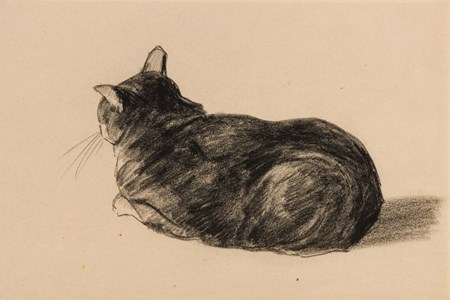 Born in Geneva to French parents, Pierre-Georges Jeanniot was a student of his father, Pierre-Alexandre Jeanniot, who served as the director of the Ecole des Beaux-Arts in Dijon for many years. Although he attended the military college at Saint-Cyr and began his career in the army, he painted and drew in his spare time. In 1872 Jeanniot made his debut at the Salon, where he showed some watercolours, and the following year exhibited his first painting, a landscape. At first known for military subjects, he soon turned his attention to the elegant Parisian genre scenes and studies of the society women of the Belle Epoque for which he became best known. He exhibited regularly at the Salons of the Société des Artistes Français in Paris and the Société Nationale des Beaux-Arts in Nantes, while between 1893 and 1903 he also exhibited at the Munich Secession. Jeanniot was very successful as an illustrator, working on more than thirty books between 1884 and his death, and also worked as a cartoonist. Shortly after his death in 1934, a retrospective exhibition was held at the Galerie Georges Charpentier, and the same year a selection of his works was gifted to the Musée des Beaux-Arts in Dijon by his widow.