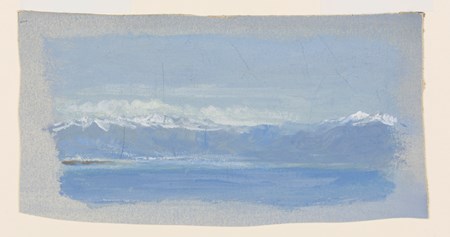 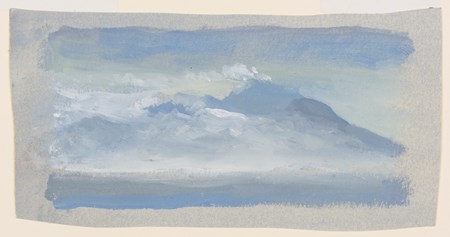 One of the most famous artists of his day, George Frederic Watts followed a childhood apprenticeship in the studio of the sculptor William Behnes with studies at the Royal Academy Schools. His early years as an independent artist were largely devoted to portraiture, and among his first significant patrons was the Anglo-Greek merchant Alexander Constantine Ionides. In 1843 he travelled to Italy and spent the next four years living and working in Florence, where his first hosts were Lord and Lady Holland, and also visited Perugia, Milan, Rome and Naples. Back in London in 1847, Watts continued to paint both history subjects and portraits, and enjoyed considerable commercial success, aided by his association with a large circle of eminent and influential society patrons. In 1852 he won a commission for a fresco for the new Palace of Westminster. Although he occasionally exhibited his work at the Royal Academy, he chose not to put himself forward for election as an Academician, as was common practice at the time. In the 1850s Watts began working on large-scale mural decorations, notably a fresco of Justice: A Hemicycle of Law-Givers, painted between 1853 and 1859 for the Great Hall of Lincoln’s Inn in London. The 1860s found the artist also working as a portrait painter, for which he achieved considerable fame and earned numerous new clients. In 1867, at the age of fifty, Watts was finally elected to the Royal Academy by the acclamation of his peers, being named an Associate and achieving full membership within the same year, most unusually. He exhibited at the Royal Academy throughout the next decade, showing both important easel pictures and portraits. With the founding of the Grosvenor Gallery in 1877, however, Watts began to show his work there as well. It was at the Grosvenor Gallery in 1881 that a retrospective exhibition of over two hundred paintings by Watts, painted over a career of some forty years, was held; the first time that any living artist had been honoured in this way. By this time a senior figure in the Victorian art world, Watts had moved into Little Holland House, a large home and studio in Kensington to which he soon added a gallery displaying his work, which was open to the public on weekends. Little Holland House became a meeting place for English and foreign artists and other visitors. In 1884 Watts sent a group of fifty works to the newly-established Metropolitan Museum of Art in New York; their first devoted to a living artist, while other significant works were shown elsewhere in America, as well as in France, Germany and Belgium. In 1896 another retrospective exhibition of Watts’s work was held at the New Gallery in London. Watts painted over eight hundred canvases, as well as numerous drawings and some significant works of sculpture