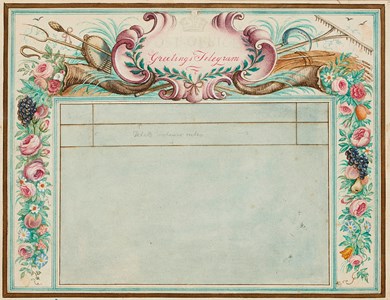 Rex Whistler showed considerable promise as a draughtsman from a very early age, winning prizes at the Royal Drawing Society while still a child. In 1922, at the age of sixteen, he entered the Slade School of Art in London, studying under Henry Tonks, and remained there until 1926. The following year, at Tonks’s recommendation, Lord Duveen commissioned Whistler, aged just twenty-three, to paint the mural decoration (entitled by the artist In Pursuit of Rare Meats) for the restaurant at the Tate Gallery on Millbank, which remains in situ today. The success of this very public work established the young artist’s reputation, and led to numerous commissions. He also won a brief scholarship to the British School in Rome. As well as a further two dozen or so large mural commissions, mainly for private country homes such as Port Lympne in Kent, commissioned by Sir Phillip Sassoon, Plas Newydd on Anglesey and Mottisfort Abbey in Hampshire, Whistler provided illustrations and dust jackets for around ninety books and stage designs and costumes for around twenty-five plays, ballets and operas, as well as a steady stream of designs for bookplates, advertisements, calendars, programmes and stationery. In 1940 Whistler was commissioned into the Welsh Guards. During the first few years of the Second World War, which he spent training as a tank commander in England, the charming poetry and elegant mannerism of his earlier work gave way to a bolder, more impressionistic style. Sent to Normandy as part of the Allied invasion, Whistler died soon after D-Day, on his first day of combat action, at the age of thirty-nine.