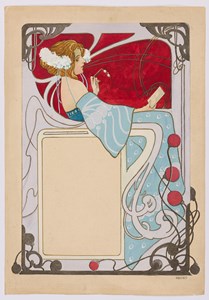 Almost nothing is known of Sergius Josef Hruby’s youth or early training as an artist. He is known to have joined the army in 1889, and by the end of the following year had been promoted to a lieutenant in the reserve. The first mention of his work as a painter is in 1891, when the young Hruby is recorded as having painted a large coat of arms celebrating the alliance between Austria-Hungary, Germany and Italy for a room in a building in Teplitz. By 1896 he was studying at the Kunstgewerbeschule (School of Applied Arts) in Vienna, supported by a pair of small grants from the Freiherr Albert von Rothschild Foundation, and also at the Vienna Akademie der bildenden Künste (Academy of Fine Arts), where he studied under portrait painter August Eisenmenger. In 1897, the artist was given the honour of illustrating the address of congratulation for the Archduke Rainer Ferdinand’s seventieth birthday. In March 1899 Hruby was appointed a teacher at the local technical school in Teplitz, the Teplitzer k.k. Fachschule für Thonwaren-Industrie und andere Kunst-Gewerbe, which trained artisans for the local pottery industry. Hruby’s early work was of a classical aesthetic and was indebted to the example of artists such as Lawrence-Alma Tadema and Rudolf Jettmar. Around the turn of the century, however, he became influenced by the work of Alphonse Mucha, embracing the ornamental and decorative Art Nouveau style. From around 1910, Hruby became devoted to the Symbolist style, remaining true to its eerie and mystical figures for much of his later career, and by the 1920s and 1930s his work was reminiscent of the early work of Gustav Klimt. Though the artist was only just coming of age within the Viennese artistic community during the first foray of the Vienna Secession, Hruby was never formally associated with the group, and instead showed at the Wiener Künstlerhaus, which he joined in 1922. Although he participated in nearly every exhibition there between 1919 and 1938, his membership was terminated in 1941 because of his wife's Jewish background. Hruby died in 1943, at the age of seventy-four. The following year the Kunstlerhaus purchased some drawings form Hruby’s daughter, and also planned a memorial exhibition of his work; a project which never came to fruition. A group of over forty works by Sergius Hruby is today in the collection of the Albertina in Vienna.