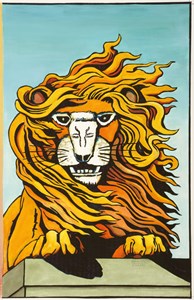 A contemporary American illustrator, Lars Hokanson studied at the University of the Arts in Philadelphia, graduating in 1967, and worked mainly as a freelance artist. Working between Pennsylvania and New Jersey, Hokanson was a talented illustrator for magazines and books, as well as a painter and wood engraver. Among his public works are a series of large murals in the theatre of the Yogi Berra Museum and Learning Center in Little Falls, New Jersey. Early in Hokanson’s career, he often worked in tandem with his late wife Lois, mainly on book illustrations. He later married Frances I. Cichetti, with whom he continued to occasionally collaborate, such as on drawings for the anthology The Ultimate Dragon, published in 1995. Hokanson also produced illustrations for such books such as Jules Verne’s A Journey to the Center of the Earth, published in 1995 and Nathaniel Hawthorne’s Twice-Told Tales, which appeared in 2000. Examples of Hokanson’s prints are today in the collections of the Tate and the National Portrait Gallery in London.