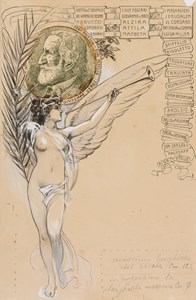 A lifelong exponent of the Art Nouveau style, known in Italy as the ‘Stile Liberty’, Roberto Franzoni enjoyed a long and productive artistic career, working in the fields of painting, sculpture and the graphic arts. He was born to a poor family in Bologna and was trained at the Collegio Artistico Venturoli, which he entered at the age of twelve and where he remained until 1902, when he won a scholarship for a further four years. He is also likely to have studied at the Accademia di Belle Arti in Bologna, although his name is not found in any official records. His attraction to the Liberty style is evident in his earliest works, and he seems to have been influenced in particular by the work of Alphonse Mucha, as well as the Swedish artist Carl Larsson and the British Arts and Crafts designer William Morris. He was a member of the Società per le Arti Francesco Francia between 1902 and 1914, and participated in several of the exhibitions presented by this artistic society in Bologna. In 1908 Franzoni decorated the Rizzi chapel in the cemetery of the Certosa in Bologna, with an elaborate decorative scheme involving painting, stucco, glass and ironwork, all in an Art Nouveau style. In 1914 he painted tempera panels for rooms in the Palazzo Ronzani in Bologna, and also later worked on the decoration of the Palazzo Saraceni and the Credito Fondario in Bologna. As well as paintings and drawings, Franzoni produced designs for film and travel posters, stamps, and the applied arts. He spent the last years of his career in the republic of San Marino, where he designed a large number of the country’s stamps. It was also in San Marino that, in 1960, the first one-man exhibition of Franzoni’s work was held, shortly after the artist’s death in January of that year. Although a second comprehensive exhibition was held at the Galleria del Caminetto in Bologna in 1967, Franzoni remains relatively little-known today, particularly outside Italy.