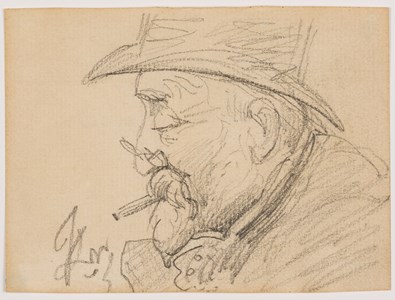 François-Louis Français began his artistic career as an illustrator, utilizing the mediums of lithography and wood engraving. In 1834 he entered the the Ecole des Beaux Arts, where he studied under Jean Gigoux. He exhibited at the Salon for the first time in 1837, and in the same year met the artist Camille Corot, who would become one of the biggest influences on his work. Corot and Français would work together for the next ten years. The next phase in his career came during the middle of the 1840s. In 1846 he travelled south to Italy with his close friend François-Auguste Ravier. Initially intending to only last three months, the trip was extended and Francais ended up staying in Italy for a total of three years. Travel would remain a large influence on his life and art, and Français often went on sketching expeditions with other artists, including Corot, Gustave Courbet and Henri-Joseph Harpignies. From 1873 onwards he spent the winter months residing in Nice, along with close friends Harpignies and Emile Dardoize. Although Français was mainly active as a landscape painter, he also painted a number of fine portraits and a few still life subjects. He was fond of depicting fellow artists, and produced portraits of Jean-Alexis Achard, Corot, Courbet, Jean-Auguste Dominique Ingres and Celestin Nanteuil.